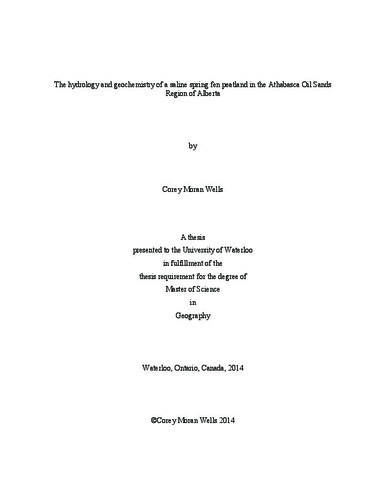 Due to the nature of the regional geology and the bitumen extraction process, the post-mined landscape of Canada’s oil sands region will have a much higher concentration of dissolved salts than it did prior to mining. As a result, naturally saline wetlands may constitute appropriate reclamation targets and knowledge of saline wetland hydrology can provide important clues to their form and function. Furthermore, the presence of saline discharge features in the Athabasca oil sands region (AOSR) provides an opportunity to study more closely the nature of groundwater flow in a region of considerable hydrogeologic complexity, including the origin and flow history of brines and the link between springs, subsurface wastewater containment and surface water quality. A low-flow saline-spring fen peatland located adjacent to a proposed in-situ oil extraction facility was examined south of the oil sands hub of Fort McMurray, Alberta. Hydrologically disconnected from underlying Devonian deposits that are a typical source of salinity, a saline groundwater plume originating from a Lower Cretaceous aquifer (the Grand Rapids Formation) was identified as a likely source for the accumulation of Na+ (mean of 6,949 mg L-1) and Cl- (mean of 13,766 mg L-1) in fen groundwater. Considerable spatial variability in ground and surface water salinity was observed, with the concentration of dissolved salts decreasing by an order of magnitude in the direction of flow. A sharp decrease in near-surface salinity was found along the entire perimeter between the fen and adjacent freshwater wetlands. Patterns in deep groundwater flux were difficult to interpret due to possible inaccuracies associated with the piezometer network (e.g., time-lag errors in low hydraulic conductivity substrates), and rates of groundwater input were estimated to be small (< 1 mm over a season) due to the low conductivity of the underlying mineral till (5.5x10-7 cm s-1). Water table dynamics were exaggerated in response to wetting and drying for both study seasons and the fen’s small subsurface storage capacity was readily exceeded under periods of sustained rainfall. The large pond network functioned as an effective transmitter of surface water during periods of high water table but was a sink of groundwater during dry periods due to high rates of evaporation. Despite flooding conditions observed in 2012, groundwater exchange between the fen and adjacent wetlands was low and the rough microtopography worked to detain surface waters and restrict runoff in the fen’s lower reaches. Together these mechanisms worked to isolate the saline fen and restrict the flux of saline waters into the surrounding landscape. Elevated concentrations of dissolved salts in nearby wetland and river systems indicates that influence of saline discharge is not solely restricted to the region’s major river systems. The flux of salt from saline wetlands may play an important role in the overall water quality of groundwater and receiving water bodies (e.g., nearby river systems). The geochemical signature of fen groundwater points to halite as a source of salinity, as indicated by Cl-/Br- ratios in excess of 7,000. This is in contrast to what has been observed for regional formation brines that are typically related to evaporated seawater. Isotopic evidence and relatively low salinities compared to springs in the Wood Buffalo region suggests that fen discharge water may be significantly diluted as a result of mixing with freshwater sources. The contribution of evaporite to discharge water may be coming from somewhere deeper and further south in the basin. This has important implications for the disposal of wastewater by deep well injection, as disposal zones may be hydrologically linked to near-surface aquifers and discharge features well beyond the immediate production and storage area.

Corey Moran Wells (2014). The hydrology and geochemistry of a saline spring fen peatland in the Athabasca oil sands region of Alberta. UWSpace. http://hdl.handle.net/10012/8402