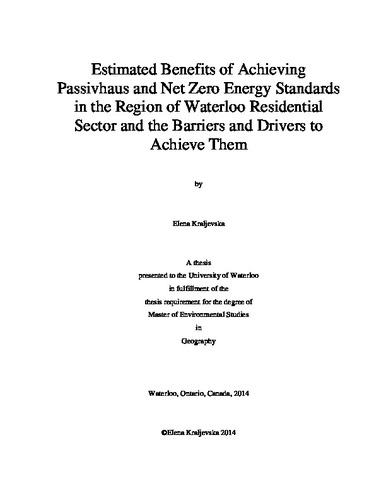 As the third largest energy consumer, the residential sector in Canada is responsible for 17% of energy consumption and 15% of greenhouse gas emissions. With the increase in population, the number of new houses is expected to increase by 2.8 million from 2005 to 2020, and more energy is expected to be consumed despite the emergence of better insulated houses and more efficient heating methods. The primary objective of this study is to determine the prospects of reducing CO2 emissions from the residential sector in Waterloo Region by achieving a higher building standard, such as the Passivhaus (PH) and Net Zero Energy (NZE). The profile of the building envelope, including the initial CO2 emissions was compared against the requirements of the PH and NZE standards, using the Residential Energy Efficiency Project dataset (2007-2012). The second objective evaluates the barriers and drivers that influence the setting of higher building envelope standards. Ontario Building Codes (1975-2012) were analysed to determine the changes to insulation requirements over time, and Ontario Legislative Assembly debates (1970-2012) were reviewed to determine the barriers and drivers expressed in political debates. Content analysis was applied to the Legislative Assembly of Ontario’s documents to determine the frequency of nine word categories prior to each new building code. This study identified three main categories of drivers: awareness of environmental issues, resource limitation, and the implications of climate change; and three categories of barriers: financial, political and structural, and barriers related to information, promotion, and education. The findings of this study confirm that existing houses in Waterloo Region can achieve substantial reductions in CO2 emissions and energy usage by meeting higher building standards. Building code improvements have certainly played an important role in the evolution of Ontario houses, and the 2012 building code, achieves the R-2000 standard universally. More advanced standards show the potential for greater savings, but have only been adopted on a voluntary basis.

Elena Kraljevska (2014). Estimated Benefits of Achieving Passivhaus and Net Zero Energy Standards in the Region of Waterloo Residential Sector and the Barriers and Drivers to Achieve Them. UWSpace. http://hdl.handle.net/10012/8399