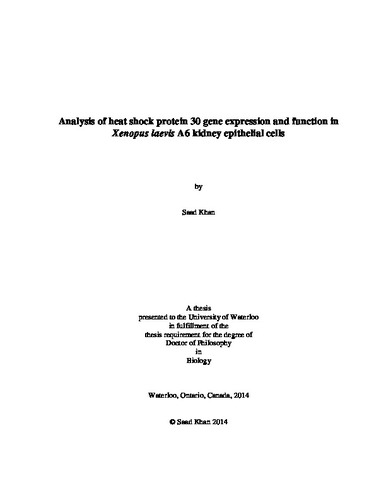 Heat shock proteins (HSPs) are molecular chaperones that assist in protein synthesis, folding and degradation and prevent stress-induced protein aggregation. The present study examined the pattern of accumulation of HSP30 and HSP70 in cells recovering from heat shock as well as the effect of proteasome inhibition on cytoplasmic/nuclear and endoplasmic reticulum (ER) molecular chaperone accumulation, large multimeric HSP30 complexes, stress granule and aggresome formation in Xenopus laevis A6 kidney epithelial cells. Initial immunoblot analysis revealed the presence of elevated levels of HSP30 after 72 h of recovery. However, the relative levels of HSP70 declined to near control levels after 24 h. The relative levels of both hsp30 and hsp70 mRNA were reduced to low levels after 24 h of recovery from heat shock. Pretreatment of cells with cycloheximide, a translational inhibitor, produced a rapid decline in HSP70 but not HSP30. The cycloheximide-associated decline of HSP70 was blocked by the proteasomal inhibitor, MG132, but had little effect on the relative level of HSP30. Also, treatment of cells with the phosphorylation inhibitor, SB203580, in addition to cycloheximide treatment enhanced the stability of HSP30 compared to cycloheximide alone. Immunocytochemical studies detected the presence of HSP30 accumulation in a granular pattern in the cytoplasm of recovering cells and its association with aggresome-like structures, which was enhanced in the presence of SB203580. To verify if proteasome inhibition in A6 cells induced the formation of similar HSP30 granules, immunoblot and immunocytochemical analyses were performed. MG132, celastrol and withaferin A enhanced ubiquitinated proteins, inhibited chymotrypsin-like activity of the proteasome and induced the accumulation of cytoplasmic/nuclear HSPs, HSP30 and HSP70 as well as ER chaperones, BiP and GRP94 and heme oxygenase-1. Northern blot experiments determined that proteasome inhibitors induced an accumulation in hsp30, hsp70 and bip mRNA but not eIF1α. The final part of this study demonstrated that treatment of A6 cells with proteasome inhibitors or sodium arsenite or cadmium chloride induced HSP30 multimeric complex formation primarily in the cytoplasm. Moreover, these stressors also induced the formation of RNA stress granules, pre-stalled translational complexes, which were detected via TIA1 and polyA binding protein (PABP), which are known stress granule markers. These stress granules, however, did not co-localize with large HSP30 multimeric complexes. In comparison, proteasome inhibition or treatment with sodium arsenite or cadmium chloride also induced the formation of aggresome-like structures, which are proteinaceous inclusion bodies formed as a result of an abundance of aggregated protein. Aggresome formation was identified by monitoring the presence of vimentin and γ-tubulin, both of which are cytoskeletal proteins and serve as markers of aggresome detection. Aggresome formation, which was also verified using the ProteoStat assay, co-localized with large HSP30 multimeric complexes. Co-immunoprecipitation experiments revealed that HSP30 associated with γ-tubulin and β-actin in cells treated with proteasome inhibitors or sodium arsenite or cadmium chloride suggesting a possible role in aggresome formation. In conclusion, this study has shown that the relative levels of heat shock-induced HSP30 persist during recovery in contrast to HSP70. While HSP70 is degraded by the ubiquitin-proteasome system, it is likely that the presence of HSP30 multimeric complexes that are known to associate with unfolded protein as well as its association with aggresome-like structures may delay its degradation. Finally, proteasome inhibition, sodium arsenite and cadmium chloride treatment of A6 cells induced cytoplasmic/nuclear and ER chaperones as well as resulting in the formation stress granules and aggresome-like structures which associated with large HSP30 multimeric complexes.