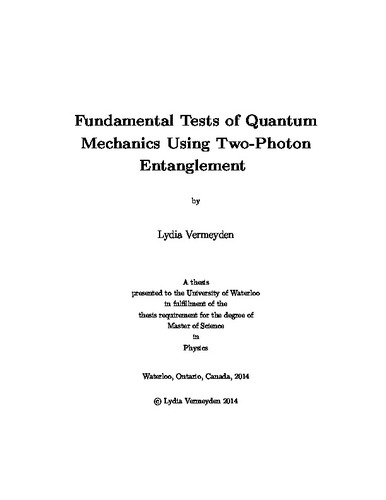 In this thesis, we experimentally test fundamental properties of quantum mechanics, namely non-locality (in the form of three new families of Bell's inequalities) and the symmetry of envariance. To accomplish these we use a Sagnac source of polarization entangled photon pairs. In chapters one and two we discuss the relevant background information in quantum information theory, nonlinear optics, experimental realization of polarization entangled photons and a trouble-shooting and maintenance guide for a Saganc source. In chapter three we experiment with a set of three newly derived families of Bell's inequalities. These three families are predicted to yield the largest volume of violation of the local hidden variable models (LHVM). Our experimental results are in good agreement with those predictions and therefore, represent the largest volume of experimental violation of LHVM to date. We showed a violation of up to 30 sigma from what is predicted by LHVM, and our results followed closely to the predictions of quantum mechanics. In chapter four we experimentally test envariance, an assisted-symmetry exhibited by specifi c quantum systems. Envariance is a fundamental property in the quantum world that has lacked, until now, extensive experimental study. The symmetry has ramifi cations in the foundations of quantum mechanics, and plays an integral role in a proof of Born's rule [1]. Our results serve as a benchmark the property of envariance. We show that experimental quantum states can be (99.66+/- 0.04)% envariant over a wide range of transformations, as measured using the average quantum fi delity [2], and (99.963 +/- 0.005)% as measured using a modifi ed average Bhattacharya Coeffi cient [3], a measure of the overlap of two probability distributions.