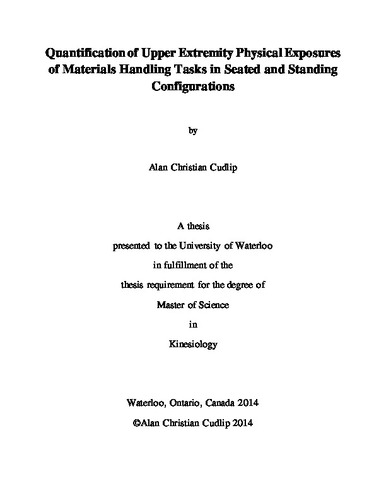 Prolonged periods in sitting or standing may negatively influence worker health. Integration of sit-stand workstations has attempted to mitigate these deleterious effects, and has generated positive results in terms of postural discomfort, injury risk and worker fatigue. Identification of how identical tasks are affected by sitting and standing is necessary to take advantage of loading differences between these configurations. The purpose of this research was to determine if differences in workplace configurations between seated and standing postures created changes in posture or muscular activity levels during manual materials handling tasks. Twenty male and twenty female participants performed four manual materials handling tasks: a 40N static push, a 40N static pull, a weighted bottle transfer set at 15% of the participant’s maximal arm elevation force, and a light assembly task in sitting and standing. Upper extremity electromyography was collected at 8 sites, and changes in local joint moments and body discomfort were calculated. Interactions between task and sit/stand configuration resulted in increases of up to 500% in some joint moments, 94% in EMG activity and 880% in some local body discomfort regions when tasks were completed in sitting. A main effect of sitting appeared primarily in joint moments and muscle activity, and generally resulted in increased loading in sitting. Important exceptions existed, which included resultant wrist joint loading 8.2 times larger in standing, and foot/shank discomfort increasing by up to 609%. Task differentially affected all EMG outputs, as well as most local joint moments and body discomfort regions. Future recommendations regarding upper extremity exposures during manual materials handling tasks should consider placing workers in standing postures instead of seated ones to minimize musculoskeletal loading to the upper extremity. In addition, the effects of task and sit/stand configuration should be considered in order to leverage differences between these positions, with tasks in standing generally resulting in decreased musculoskeletal disorder risks.