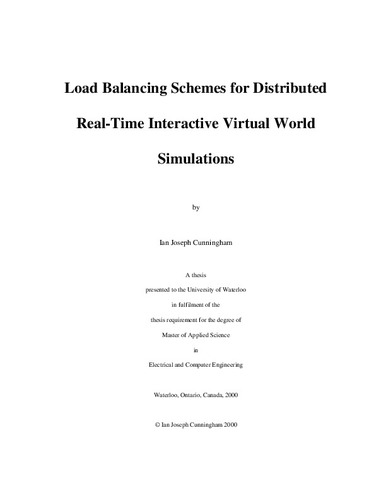 Over the last several years, there has been tremendous growth in online gaming (i. e. playing games over the internet). The Massively Multiplayer Online Role Playing Game (MMORPG) is one type of online game. An MMORPG is played within a virtual world. Users have an in-game representation, called an avatar, that they control. Typically there are over a thousand avatars in the virtual world at one time. Users use client software to connect to an MMORPG server over the internet. If just one server is used then the number of avatars that can be supported in the virtual world at one time is severely limited. In order to overcome this, a multi-server approach is needed. Unlike traditional load balancing and partitioning schemes, which generally use task partitioning, data partitioning is required in this case. This thesis investigates schemes for partitioning and load balancing MMORPG applications on a network of processors. In particular, three different schemes were developed andexamined. These are: Static Av, Static MS and Dynamic MS. Static Avassigns avatars to each server, one at a time, as they enter thesimulation. Static MS assigns equal sized portions of the map of thevirtual world to each server. An avatar is assigned to the server thatowns the part of the map that the avatar is "standing"on. Dynamic MS divides the map into many more segments than there are servers. The map segments are dynamicallydistributed among the servers based on the results of aload balancing algorithm. The thesis details the algorithms and the performance associated with each of the schemes. In summary, Static Av does not perform well, whereas Static MS and Dynamic MS can be used to parallelize MMORPGapplications. To the best of our knowledge, this is thefirst published work that looks at the issue ofparallelizing and load balancing such applications.