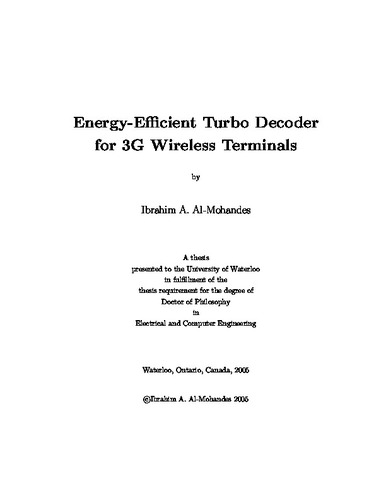 Since its introduction in 1993, the turbo coding error-correction technique has generated a tremendous interest due to its near Shannon-limit performance. Two key innovations of turbo codes are parallel concatenated encoding and iterative decoding. In its IMT-2000 initiative, the International Telecommunication Union (ITU) adopted turbo coding as a channel coding standard for Third-Generation (3G) wireless high-speed (up to 2 Mbps) data services (cdma2000 in North America and W-CDMA in Japan and Europe). For battery-powered hand-held wireless terminals, energy consumption is a major concern. In this thesis, a new design for an energy-efficient turbo decoder that is suitable for 3G wireless high-speed data terminals is proposed. The Log-MAP decoding algorithm is selected for implementation of the constituent Soft-Input/Soft-Output (SISO) decoder; the algorithm is approximated by a fixed-point representation that achieves the best performance/complexity tradeoff. To attain energy reduction, a two-stage design approach is adopted. First, a novel dynamic-iterative technique that is appropriate for both good and poor channel conditions is proposed, and then applied to reduce energy consumption of the turbo decoder. Second, a combination of architectural-level techniques is applied to obtain further energy reduction; these techniques also enhance throughput of the turbo decoder and are area-efficient. The turbo decoder design is coded in the VHDL hardware description language, and then synthesized and mapped to a 0. 18<i>&mu;</i>m CMOS technology using the standard-cell approach. The designed turbo decoder has a maximum data rate of 5 Mb/s (at an upper limit of five iterations) and is 3G-compatible. Results show that the adopted two-stage design approach reduces energy consumption of the turbo decoder by about 65%. A prototype for the new turbo codec (encoder/decoder) system is implemented on a Xilinx XC2V6000 FPGA chip; then the FPGA is tested using the CMC Rapid Prototyping Platform (RPP). The test proves correct functionality of the turbo codec implementation, and hence feasibility of the proposed turbo decoder design.