Interfering With Memory Retrieval: The Cost of Doing Two Things at Once 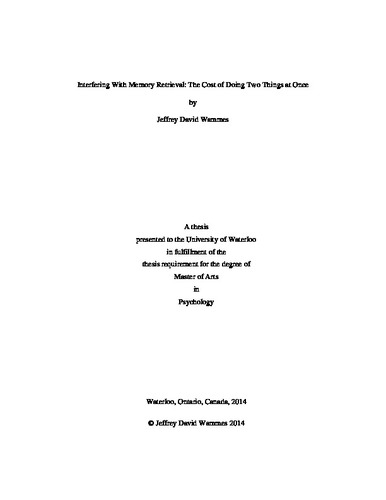 A dual-task paradigm was used to infer the processes critical for episodic memory retrieval by measuring susceptibility to memory interference from different distracting tasks. Research suggests that retrieval interference occurs due to material-specific overlap between concurrent tasks. I tested whether interference could instead arise from processing-specific overlap. In Experiment 1, I took advantage of individual differences in how verbal materials could be represented in those with different language backgrounds. I compared recognition of studied information in English and Chinese speakers under full attention (FA) or under one of two different divided attention (DA) conditions. Participants viewed simplified Chinese characters or English words, and later completed recognition while simultaneously performing distracting tasks requiring phonological (DAP) or visuospatial (DAV) processing of auditorily presented letters. I found an interaction such that Chinese speakers were more susceptible to interference from the visuospatial than phonological distracting task, whereas the reverse pattern was shown in English speakers. These results suggest that interference with memory retrieval is processing-, not material-, specific, as both distracting tasks used the same materials. Next I sought to determine whether processing-specific interference could be observed within the visuo-spatial domain. Accordingly, in Experiments 2 and 3, I examined whether face recognition would be disrupted more by a distracting task requiring configural than featural processing. In Experiment 2, participants studied faces under FA and subsequently performed a recognition task under either FA or each of two different DA conditions in which a distracting face was presented alongside, requiring either a featural (DAF) or configural (DAC) decision. In line with a material-specific account of interference, face memory accuracy was disrupted in both DA conditions relative to the FA condition, although no processing-specific differences in interference were found between the DA conditions, likely because both distracting tasks engaged configural processing. To better isolate the different processing streams in Experiment 3, some faces were inverted to offset configural processing and to engage featural processing. I compared patterns of memory interference when target faces were presented upright (configural) or inverted (featural). I found a crossover interaction: memory for upright faces was worse in the DAC than in the DAF condition, whereas the reverse was true for inverted target faces, supporting a processing-specific account of memory interference. In Experiment 4, I sought to rule out task difficulty as an alternative explanation for the pattern of interference effects. I measured whether each distracting task produced similar slowing, which provides an indirect assessment of resource requirements of a task, on a simultaneously performed auditory tone discrimination task. Results showed that my distracting tasks were not differentially attention demanding, as indexed by similar accuracy rates for tone classification and response times on the tone discrimination task when performed concurrently with each distracting task. Findings suggest that the magnitude of memory interference under DA conditions at retrieval is influenced by material-specificity but that, critically, it also depends on the extent to which the processing demands of the distracting and retrieval tasks overlap. I have shown here that retrieval is not automatic or obligatory as others have suggested, but instead is subject to disruption. This thesis specifies that retrieval interference can occur due to competition for a limited pool of common processing resources across target and distracting tasks. Thus, when trying to recall studied information, one should avoid distracting conditions, especially those that overlap significantly not only with the type of materials tested but also with the mental processes required to retrieve that target information.