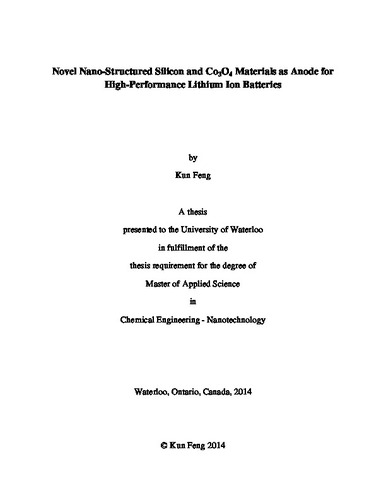 Lithium ion batteries (LIBs) play an essential role in modern life. Although relatively unknown throughout past decades, LIBs have supplanted several categories of chemically rechargeable batteries including lead-acid, nickel-cadmium and nickel-hydrogen batteries. Nowadays, LIBs dominate the market of portable electronic devices such as mobile phones, digital cameras and laptops. As the price of petroleum keeps increasing, electrically powered or assisted vehicles using LIBs are similarly gaining in the automotive market. However, current state-of-art LIBs using graphite as their electrical anode and Li metal oxides as the cathode are facing major challenges. For example, the current LIBs are approaching their capacity limit. Batteries that can maintain high charge and discharge rates are in great demand, which has not been adequately addressed by modern LIBs. Safety issues with these current batteries are being reported even from some market leaders such as Boeing and Tesla. Herein, several categories of novel anode materials have been investigated in a search for promising candidates to enable evolution of the next generation of lithium ion batteries. This research included silicon-carbon based materials, especially silicon-graphene (Si-G) materials and their derivatives, and transitional metal based materials, e.g., cobalt oxide (Co3O4). In this proposed work, Si-G composites were synthesized via a freeze-drying method; the conditions of the synthesis were controlled and adjusted to obtain a Si-G composite with the most promising morphology as well as battery performance. Based on preliminary results, graphene wrapped silicon electrodes showed significantly improved cycling performance than bare silicon electrodes. At high charge and discharge rates it was found that Si-G composites also showed superior stability and capacity retention over bare silicon electrodes. After 200 cycles, the optimized Si-G composite maintained a capacity retention close to 100%, with a capacity of 800 mAh g-1 at a 0.2 C rate and 600 mAh g-1 at a 1 C rate. This observation was a prominent increase from the performance of commercial graphite-based batteries at a theoretical capacity 372 mAh g-1. Considering the facile fabrication method and increasing use of commercial silicon nano-particles (Si-NPs) into account, Si-G composites could be a promising candidate for the anode material in LIBs. Extended work on the Si-G project also involved further decorations based on the Si-G composite synthesized from the method previously mentioned, as well as improvement on the synthesis method to make it more applicable for industrial purposes. Cobalt Oxide (Co3O4), a transitional metal oxide which has a theoretical capacity of 890 mAh g-1, draws attention as an anode material in LIBs due to its capacity compared to graphite and heavily reduced degradation compared to silicon. A novel electrode fabrication procedure was adopted in this research together with a simple material-synthesizing methodology. Similar to common silicon electrodes, Co3O4 suffers from poor electron conductivity volume change upon cycling. Herein the Co3O4 active material is directly deposited on stainless steel mesh, serving as both a current collector and a substrate for the active material. Through adapting the electrode fabrication process by directly depositing on the stainless steel electron conductor, the traditional conductive carbon material and binder requirements can be avoided. As a result, the process is reduced in both cost and complexity. The presented novel electrode design facilitates both ion diffusion and electron transportation, improving the overall performance of the material in LIBs. After 100 cycles of charge and discharge, Co3O4 on stainless steel mesh shows a capacity around 770 mAh g-1, which is more than twice that of graphite. The capacity retention was around 90% in this case.