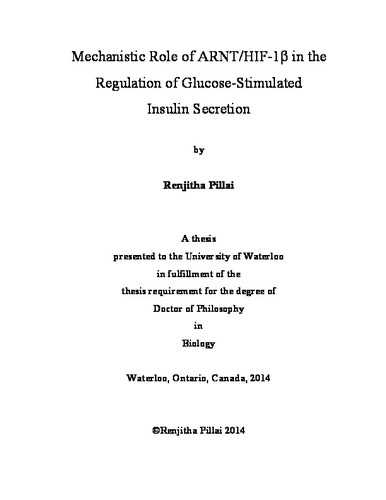 Loss of glucose-stimulated insulin secretion (GSIS) from the pancreatic beta-cells is one of the earliest detectable defects in the pathogenesis of type 2 diabetes. However, despite its relevance, the mechanisms that govern GSIS are still not completely understood. ARNT/HIF-1β is a member of the bHLH-PAS family of transcription factors, with a prominent role in the transcriptional regulation of enzymes required for the metabolism of xenobiotics as well as regulation of genes that are critical for cellular responses to hypoxia. Recent research has uncovered a previously unknown function for ARNT/HIF-1β in the pancreatic beta-cells, where the gene was found to be 90% down-regulated in human type 2 diabetic islets and loss of ARNT/HIF-1β protein leads to defective GSIS in pancreatic beta-cells of mice. The main focus of this thesis was to understand the mechanisms by which ARNT/HIF-1β maintains normal GSIS from pancreatic beta-cells and understand how loss of ARNT/HIF-1β leads to beta-cell dysfunction and type 2 diabetes in mice. ARNT/HIF-1β was found to positively regulate GSIS in both INS-1 derived 832/13 cell line and mice islets. In the 832/13 cells, loss of ARNT/HIF-1β leads to a reduction in glycolysis without affecting the glucose oxidation and the ATP/ADP ratio suggesting that the regulation of GSIS takes place in a manner that is independent of the KATP channels. In order to further assess the mechanism of lowered GSIS in the absence of ARNT/HIF-1β in the 832/13 cells, a metabolite profiling was performed which revealed a significant reduction in the metabolite levels of glycolysis and the TCA cycle intermediates and glucose-induced fatty acid production, suggesting the involvement of ARNT/HIF-1β in regulating glucose-stimulated anaplerosis, which is believed to play a key role in the regulation of GSIS from the pancreatic beta-cells. The changes in metabolite levels in the absence of ARNT/HIF-1β were associated with corresponding changes in the gene expression pattern of key enzymes regulating glycolysis, the TCA cycle and fatty acid synthesis in beta-cells. In an attempt to understand how loss of ARNT/HIF-1β leads to beta-cell dysfunction and type 2 diabetes in mice, a pancreatic beta-cell specific ARNT/HIF-1β knock out mouse (β-ARNT KO) was generated using the Cre-loxP technology. Functional characterization of islets from both male and female β-ARNT KO mice revealed a significant impairment in GSIS, which was attributed due to a small, but significant reduction in rise in intracellular calcium upon glucose stimulation. Further analysis revealed reduced secretory response to glucose in the presence of KCl and diazoxide indicating a defect in the amplifying pathway of GSIS in β-ARNT KO islets. Expression of pyruvate carboxylase (PC) was significantly reduced in β-ARNT KO islets suggesting possible impairments in anaplerosis and consistent with this, defect in GSIS in β-ARNT KO islets could be almost completely rescued by treatment with membrane permeable TCA intermediates. Surprisingly, both male and female β-ARNT KO mice have normal glucose homeostasis. In an attempt to assess how β-ARNT KO mice maintained normal blood glucose levels, indirect calorimetry was used to understand changes in whole-body energy expenditure. This investigation revealed that β-ARNT KO mice exhibited a small but significant increase in respiratory exchange ratio (RER), suggesting a preference in utilizing carbohydrates as a fuel source, possibly leading to improved glucose uptake from the blood stream. Response to exogenous insulin was completely normal in β-ARNT KO mice suggesting intact functioning of the skeletal muscles. To conclude, based on our in vitro data, we believe that ARNT/HIF-1β plays an indispensable role in maintaining normal beta-cell secretory function, however, results from β-ARNT KO mice indicates that these mice are protected from the adverse effects of hyperglycemia. Although loss of ARNT/HIF-1β alone is not sufficient for the genesis of type 2 diabetes, it creates a perfect storm in the pancreatic beta-cells that may eventually lead to an imbalance in the whole body glucose homeostasis. Our study provides significant information to the scientific community that engages in assessing the pharmacological potential of gene targets for the treatment of type 2 diabetes.