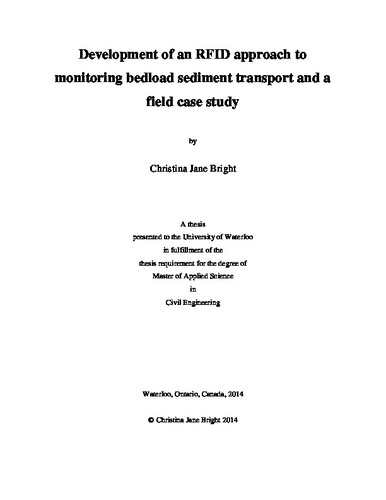 Bedload transport studies are essential in the understanding of river forms, functions and processes. These studies have been done using various methods over the past century. In recent years Radio Frequency Identification Technology (RFID) has become popular with researchers to track bedload particles. However, no standard operating procedures are used in the implementation of this technology. Methods used for tagging, seeding and tracking RFID tracers (RFID transponders inserted into a bedload particle) can introduce variability in their detection. In this study, RFID tracers were used to study four sites in Laurel Creek in Waterloo, Ontario. Two hundred RFID tracers were seeded in each of the four sites. Following three major storm events, the tracers were tracked with an antenna and their locations surveyed. The tracers were able to be detected to a precision of 1 m as a transponder used can be detected at a maximum of this distance. Practical tracking in the field highlighted the need for the understanding of how precisely the tag location can be identified. Laboratory experiments were designed and carried out to determine the effects of factors (tracer orientation, antenna orientation, tracer size, clustering of multiple tracers, burial depth, saturation and submergence of the soil matrix) that possibly confounded detection. Of these factors, tracer orientation, clustering and burial depths were determined to be the ones that affected detection distances the most. A transponder in a vertical orientation was found to have as much as 40% larger range of detection than a transponder in a horizontal orientation (i.e., they could be detected from further away). Additionally, “skip zones” were identified during laboratory and field experiments. These are zones of gaps in the electromagnetic field of the transponder that occur directly over the transponder. These zones were experimentally determined to extend to approximately 10 cm on each side of the transponder. Therefore, by identifying the skip zones, the tracers can be located to a precision of 10 cm; this is an order of magnitude smaller than the published detection limit of the transponder. The precision of detection can also be improved by the reduction of the effects of confounding factors. However, the improvement in the precision of detection is a tradeoff with the ease of detection. A tagging, seeding and tracking protocol is recommended to counter the effects of confounding factors.