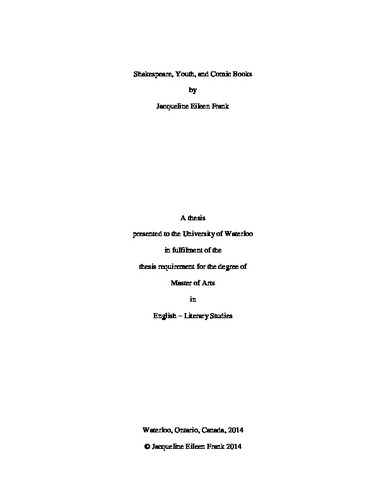 This thesis examines how Shakespearean play-texts are adapted into comic books in order to appeal to young readers. By analyzing four different adaptations including two comic book series and two manga series, it seeks to answer these research questions: what is the relationship between entertainment and education in comic book adaptations of Shakespeare? Are there problems that adaptations create at the same time as they try to solve issues of interest or understanding, as perceived by youth? This paper argues that the tension between entertainment and education in comic book adaptations of Shakespeare is usually imbalanced depending on an adaptation’s goals. Substantial changes to the narrative, setting, or characters can create strong dissonances while reading although these feelings can be countered by balancing them with other changes. Adapting Shakespeare’s work into comic books engages youth with an author that they often perceive as difficult and indicates his continued relevance in both education and entertainment.