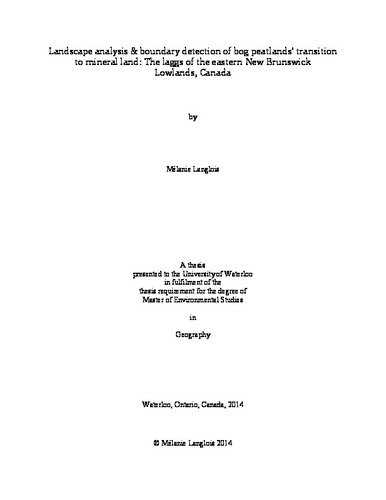 The wet zone – the lagg – that tends to form at the edge of ombrotrophic peatlands is believed to play an important role in promoting and maintaining the health of bog systems. The lagg is well-recognized by peatland scientists, yet empirical knowledge is surprisingly limited, and most of the characteristics associated with this ecotone come from qualitative observations. Understanding the role played by the lagg, and the potential impact its disturbance might have on the integrity of a raised bog system, is valuable for sustainable land management and peatland restoration science alike. This thesis explores and documents the basic ecohydrological characteristics of the lagg in the context of the neighbouring natural landscapes, and discusses the spatial properties of various types of laggs by exploring airborne LiDAR datasets to detect and position the ecotone. The specific objectives are 1) to describe the form and abiotic controls of the laggs and margins of bog peatlands, 2) to propose a conceptual model in cross-section of the “bog-lagg-mineral land” transition, 3) to explore the potential of data derived from aerial LiDAR (Light Detection And Ranging) to detect and locate laggs and lagg boundaries, and 4) to consider the spatial distribution of laggs around raised bog peatlands. Data were collected along 10 transects located within 6 relatively undisturbed bogs of the New Brunswick eastern lowlands, Canada. Each transect consisted of 4-6 wells, straddling the ombrotrophic bog and the adjacent mineral land, and of 3 nested piezometers in the center of each lagg. These instruments were used to monitor the position of the water table, to measure hydraulic gradient, hydraulic conductivity, and for water sampling. Dissimilarity analysis (edge-detection, split moving window) and similarity analysis (cluster, k-means) were used to test the delineation capacity of five variables derived from the LiDAR dataset; ground elevation (topography), vegetation height, topographic wetness index, and spatial frequency of both vegetation and ground LiDAR returns. The major abiotic control of the lagg appears to be topography. Two geomorphological categories were identified; confined and unconfined. The importance of topography is through the affect it has on water flow rates and direction, which in turn affect water chemistry, and most likely nutrient transport and availability, hence vegetation characteristics. Dissimilarity analysis of the five variables derived from LiDAR data revealed that some indicators were better at predicting the bog-lagg boundary (e.g. vegetation height), and others at finding the lagg-mineral land boundary (e.g. topography). In contrast, the similarity analysis gave more decisive influence to the topographic wetness index. When the lagg was confined between the bog and the adjacent upland, it took a linear form, parallel to the peatland’s edge. However, when the adjacent mineral land was flat or even sloping away, the lagg spatial distribution was discontinuous and intermittent around the bog. Our results confirms that laggs can take many forms, while suggesting two broad geomorphological categories from which they can more easily be studied and understood and highlight the potential offered by LiDAR technology in predicting their likely location around a raised bog. The results and conclusion from this research further our understanding of the goals to be achieved for ecological restoration, and favor sustainable management inclusive of the margins or bog peatlands.