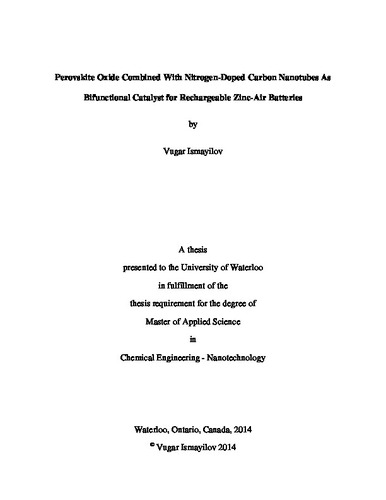 Zinc air batteries are among the most promising energy storage devices due to their high energy density, low cost and environmental friendliness. The low mass and cost of zinc air batteries is a result of traditional active materials replacement with a thin gas diffusion layer which allows the battery to use the oxygen directly from the air. Despite the environmental and electronic advantages offered by this system, challenges related to drying the electrolyte and catalyst, determining a high activity bifictional catalyst, and ensuring durability of the gas diffusion layer need to be optimized during the fabrication of rechargeable zinc-air batteries. To date, platinum on carbon (Pt/C) provides the best electrochemical catalytic activity in acidic and alkaline electrolytes. However, the difficult acquisition and high cost of this catalyst mandates investigation into a new composition or synthesis of a bifunctional catalyst. A number of non-precious metal catalyst have been introduced for zinc-air batteries. Nevertheless, their catalytic activities and durability are still too low for commercial rechargeable zinc-air batteries. Thus, it is very important to synthesize a highly active bifunctional catalyst with good durability for long term charge and discharge use. In this study, it is proposed that a manganese-based perovskite oxide nanoparticle combined with nitrogen doped carbon nanotubes willshow promising electrochemical activity with remarkable cycle stability as a bifunctional catalyst for zinc-air batteries. In the first part of this work, nano-sized LaMnO3 and LaMn0.9Co0.1O3 were prepared to research the effectiveness of Co doping into LaMnO3 and its effect on electrochemical catalytic activities. To prepare LaMnO3 and LaMn0.9Co0.1O3, a hydrothermal reaction method was applied to synthesize nanoparticles which can increase the activity of perovskite type oxides. The result shows that while perovskite oxides replacing 10 wt. % of Mn doped with Co metal did not iv change its crystalline structure, the oxygen evolution reaction (OER) performance was increased by 600%. In the second part, a core-corona structured bifunctional catalyst (CCBC) was synthesized by combining LaMn0.9Co0.1O3 nanoparticles with nitrogen doped carbon nanotubes (NCNT). NCNT was chosen because of its large surface area and high catalytic activity for ORR. SEM and TEM analysis show that metal oxide nanoparticles were surrounded with nanotubes. Based on the electrochemical performances, ORR and OER activity is attributed to NCNT and the metal oxide core, respectively, complementing the activities of each other. Furthermore, its unique morphology introduces synergetic activity especially for OER. Electrochemical test results show that the onset potential was enhanced from -0.2 V (in LaMnO3 and LaMn0.9Co0.1O3) to -0.09 V (in CCBC) and the half wave potential was improved from -0.38 V to -0.19 V. In the third part, a single cell zinc-air battery test was performed using CCBC as the bifunctional catalyst for the air electrode. These results were compared with battery performance against a high-performance and expensive Pt/C based air catalyst. The results show that the battery containing catalytic CCBC consumes less energy during charge/discharge. The single cell long-term durability performance was compared, further proving that CCBC provides a more suitable catalyst for zinc-air battery than Pt/C.