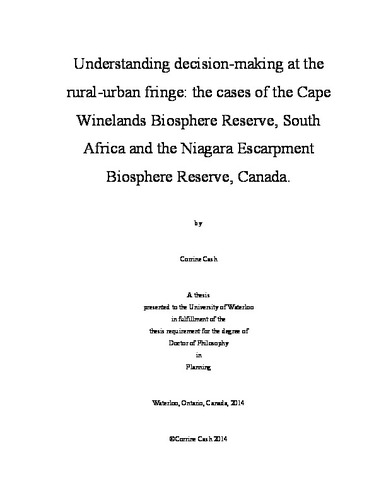 As urban areas continue to expand into rural areas the world is experiencing a loss of productive agricultural land and diminishing natural habitats and associated ecosystems. The space where urban meets rural is known as the rural-urban fringe and what happens in these areas ultimately determines urban development patterns. Despite being such an important area, the rural-urban fringe is poorly understood and is often described as a “blurry” space – blurry in land patterns because it is where multiple uses collide and in how individuals interact in this space (since actors with often diverse opinions on how land should be used coexist there). Furthermore, there is no single body of scholarly literature that explains why and how decisions get made in rural-urban fringe areas. This thesis contributes to filling this gap in literature by helping to (i) understand and explain decision-making processes at the rural-urban fringe; (ii) create an analytical framework for understanding decision-making dynamics at the rural-urban fringe within two UNESCO Biosphere Reserves: the Cape Winelands Biosphere Reserve, South Africa and the Niagara Escarpment Biosphere Reserve, Canada; and (iii) construct a theory of decision-making for better outcomes at the rural-urban fringe. The analytical framework is divided into two parts with components drawn from problem-solving (including governance and management) and critical (critical political economy and resilience) theories. The premise is that each part contributes to a holistic understanding that they cannot accomplish on their own. The analytical framework is used as the analytical platform for consideration of the research data and is the basis on which the thesis’ theoretical contribution is built. Specifically, each case study is first examined within the context of existing governance and management processes. This reveals the character of key issues and dynamics and the resulting policy responses. The cases are then located within the broader analytical contexts of critical political economy and resilience. This reveals the historical and structural dynamics often overlooked or neglected in problem-solving approaches. The thesis reveals that in both case studies, government policy notwithstanding, decision-making within the rural-urban fringe is primarily determined by neoliberal ideologies of economic development and ‘return on investment’. What emerges from the application of the analytical framework to the two case studies is a theory of decision-making for better outcomes at the rural-urban fringe wherein "better" means a process for achieving outcomes in line with the stated goals of policies and plans, generally framed by the idea of sustainable development. The theory asserts that effective decision-making for environmentally sustainable and socially equitable outcomes at the rural-urban fringe requires six conditions to be in place: (1) sufficient economic resources; (2) adequate knowledge; (3) forgiving time scale; (4) capable state; (5) robust legal structure; (6) favorable global context. All six are important though at this stage it cannot be said with absolute certainty whether better-for-all decisions may emerge in the absence of one or more of these conditions. This theory makes a meaningful contribution to the scholarship on the rural-urban fringe and advances knowledge by articulating a new integrated approach to better decision-making that addresses the explanatory weaknesses identified by this thesis for each of the five bodies of literature considered.