Moving a Market: Impacts of Heritage Nomination on a Local Community. A Case Study of Delal Khaneh in Iraqi Kurdistan 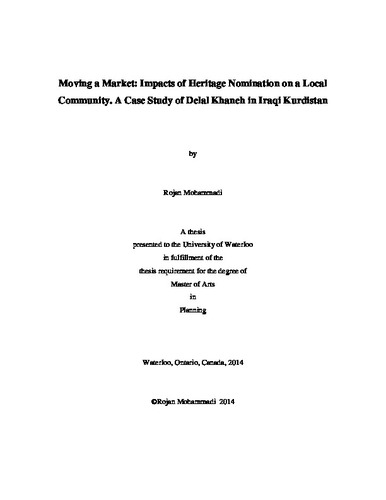 The process of globalization has become a common factor in evolving cities in many developing countries. In Kurdistan Region, Northern Iraq, current urban redevelopment plans not only involve design features imported from elsewhere, but also substantially affect urban land use. The primary goal of the regional government is to transform Erbil, Kurdistan’s capital city, into a leading city in terms of attracting foreign investments and tourists. To achieve this, Kurdistan Regional Government is leaning towards urban transformation as the solution. The city is striving to achieve a global status and in doing so, it is inevitably involved in the process of displacement. This study explores neoliberal urban transformation process within Erbil’s historic city centre and its impacts on the local residents, which has resulted in the demolition of an old bazaar and the displacement of its merchants who were relocated into a new shopping mall. In order to achieve its objectives, this study employed in-depth interviews with relocated merchants from Delal Khaneh bazaar to Nishtiman Mall and key informants in the planning and redevelopment field, as well as personal field observation. The findings indicate that the displacement of merchants had both social and economic impacts. The lack of amenities and failure to apply appropriate design standards in the new mall, Nishtiman, are two other implementation failures that the findings reveal. The demolition of the old bazaar and the relocation of its merchants to the new mall illustrate a new form of spatial fix, where the poor are purged from the city centres, a neoliberal ideology that tries to conceal urban poverty. Based on the findings, this study proposes recommendations to Kurdistan’s Regional Government and to the city of Erbil to clarify and redefine their planning objectives and implementation. As well, the concept of public participation is reconsidered while the adaptation of urban design guidelines and thorough market assessment are proposed. This study contributes to the literature on the redevelopment of historic city centres, the development of shopping malls at city centres and the adaptation of neoliberal goals for cities in developing countries.