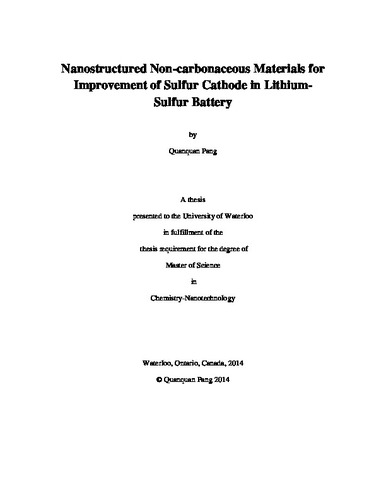 Lithium-sulfur battery based on sulfur cathode has the advantages of high specific capacity, high energy density, environmental benignity and natural abundance of sulfur. These advantages over conventional lithium-ion batteries have driven researchers to make a lot of efforts to understand the redox mechanisms and improve the cathode performance. In order to fully realize the potential of lithium-sulfur battery and to approach commercialization, there are still many problems to overcome. Among them are i) low conductivity of sulfur and the discharge product, ii) lithium polysulfide intermediates dissolution and shuttle phenomenon, iii) volumetric expansion upon discharge and iv) lithium metal dendrite formation on anode side. In this thesis, the work is mostly focused on the cathode materials in order to address the first two problems. In the first part of the thesis, reduced titanium oxide is used as both a highly conductive support and a polysulfide adsorbent to prevent the loss of active materials. Mesoporous Magnéli phase with high surface area is synthesized through a sol-gel method. The reduction to suboxide is realized by carbothermal reaction at high temperature and the porous architecture is attributed to the cross-linking of polymer-mediated gel precursor that undergoes decomposition. The strong interaction between oxide and Li2S4 is confirmed by X-ray photoelectron spectroscopy analysis, based on comparison with carbon materials. This is also visually observed from a polysulfide adsorption study where the oxide and carbons were in contact with Li2S4 solutions. With 60 wt% of sulfur introduced onto synthesized Magnéli phase material by melt-diffusion, the cathode experienced very low capacity fading rate of 0.072% per cycle over 500 cycles at a discharge rate of 2C (full discharge in half an hour). The electrode morphology evolution upon cycling reveled by scanning electron microscopy imaging demonstrated more uniform deposition of discharge products for conductive oxide than carbon, which is due to the in-situ adsorption of lithium polysulfides during discharge. In the second part, another class of metallic non-carbonaceous materials - metal boride - was explored as a sulfur host. This polar material is expected to adsorb hydrophilic polysulfide as well. Both bulk and nanosized borides were synthesized through either simple thermal decomposition of metal borohydride and solid state reaction between elements, respectively. In all samples prepared, crystalline metal boride was confirmed to be the dominant phase, with small amount of oxide forming on the surface. Especially, with the addition of carbon nanotubes for solid state reaction, the particle size of as-synthesized boride/carbon composite was effectively reduced to ~100 nm, which is vital for sulfur impregnation. With 60 wt% of sulfur impregnated, the boride/S nanocomposite exhibited a high initial capacity of 985 mA h/g with only 0.1 % of capacity fading per cycle over 200 cycles at C/2.