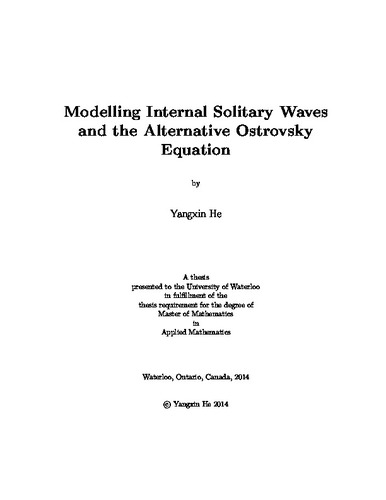 Internal solitary waves (ISWs) are commonly observed in the ocean, and they play important roles in many ways, such as transport of mass and various nutrients through propagation. The fluids considered in this thesis are assumed to be incompressible, inviscid, non-diffusive and to be weakly affected by the Earth's rotation. Comparisons of the evolution of an initial solitary wave predicted by a fully nonlinear model, IGW, and two weakly-nonlinear wave equations, the Ostrovsky equation and a new alternative Ostrovsky equation, are done. Resolution tests have been run for each of the models to confirm that the current choices of the spatial and time steps are appropriate. Then we have run three numerical simulations with varying initial wave amplitudes. The rigid-lid approximation has been used for all of the models. Stratification, flat bottom and water depth stay the same for all three simulations. In the simulation analysis, we use the results from the IGW as the standard. Both of the two weakly nonlinear models give fairly good predictions regarding the leading wave amplitudes, shapes of the wave train and the propagation speeds. However, the weakly nonlinear models over-predict the propagation speed of the leading solitary wave and that the alternative Ostrovsky equation gives the worst prediction. The difference between the two weakly nonlinear models decreases as the initial wave amplitude decreases.