Does mixed-use development benefit everyone? Housing affordability in a changing labour market 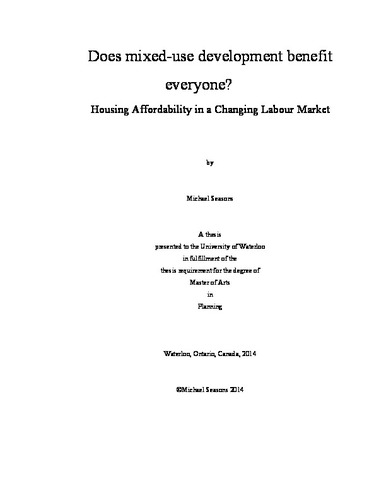 Mixed-use development is one of the canonical elements of modern urban planning theory and practice. The principles of this approach to development are applied throughout the world and have seen a resurgence in the last several decades as part of the rise of populist movements such as smart growth and new urbanism. At the same time, cities across the industrialized world have been reshaped within the broader context of fundamental restructuring in the labour market over the past several decades. The urban core of the post-industrial city has increasingly become the site of residential development amongst various complementary land uses, marketed to an upwardly mobile professional class. Who benefits from this kind of mixed-use development in the housing market? Despite its popularity, mixed-use development is not often examined with regard to the affordability of housing. This study explores the affordability of housing in areas zoned as mixed-use in the old City of Toronto in relation to shifts in the occupational structure of the city’s workforce between 1991 and 2006. Using census data and spatial analysis methods, the cartographic and analytical outputs of this study demonstrate two major findings: first, that housing in mixed-use areas was more expensive than the rest of the city over the study period; and second, that socioeconomic polarization between classes of occupations is not only evident in mixed-use areas, but in some ways more pronounced than in the rest of the city. Based on these findings, the study concludes with a realistic assessment of why and how academics, practitioners and policymakers active in urban planning should step up efforts to couple the revitalization of Toronto’s urban core with gains to the affordability of housing.