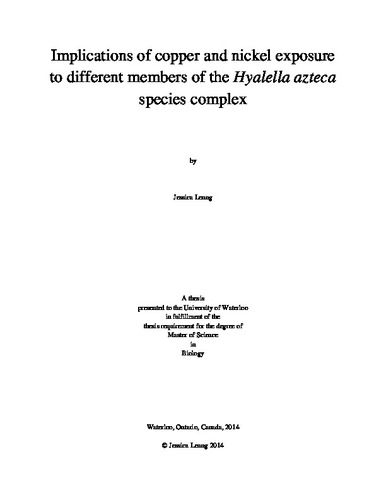 Hyalella azteca, an amphipod crustacean, is frequently used in freshwater toxicity tests. Since the mid-1980s, numerous organizations have collected and established cultures of H. azteca originating from localities across North America. However, H. azteca is actually a large cryptic species complex whose members satisfy both the biological and the phylogenetic species concepts. Recently, two publications reported that members of the H. azteca cryptic species complex have different toxicity responses to anions and an insecticide. In this study, four members of the H. azteca species complex were identified with DNA barcoding. The genetic variation among the four clades was consistent with interspecific distances between species. These lineages (clades 1, 3, 6, and 8) were cultured in identical conditions and monitored on a weekly basis to determine two life history traits: adult mortality and juvenile production. The large-bodied clades had significantly better survival and juvenile production compared to the small-bodied clade 3. Clade 6 had very low juvenile production and high mortality; therefore, was not included in this study. Unique culture protocols may be required for each clade to optimize growth, survival, and juvenile production in laboratory conditions. Genetic barcoding has identified only two clades in a survey of 17 laboratories. Therefore these two clades (1 and 8) were compared after exposure to copper and nickel 14-day toxicity tests. Clade 8 was 2.3-2.6 times more tolerant to copper exposure than clade 1 based on their LC50 and LC25. Similarly, clade 8 was more tolerant to nickel exposure than clade 1: LC50 was 1.8 times higher for the former. Nickel LBC50 and LBC25 were significantly different between clades by a factor of 2.1-2-8. Mortality (relative to copper concentrations in tissue), growth, and bioaccumulation responses were not significantly different based on overlapping confidence intervals. Although clades 1 and 8 are both large-bodied ecomorphs, these lineages had significantly different body mass (i.e., dry weight) after 14 days. The results of this study indicate that genetically characterized cultures of H. azteca should be used in toxicity tests.