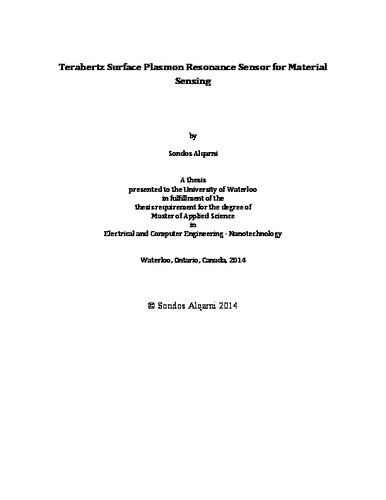 Terahertz wave (THz) is comprised of electromagnetic waves carrying frequencies from 0.1 to 30 THz. Terahertz radiation has the ability to interact with a wide range of materials, such as plastic and paper, and to provide low-­‐energy probing of the system's electronic nature, including inter/intra-­‐molecular motions and Debye relaxation -­‐ these are not accessible by other wavelengths. Further appealing feature for THz ray is the nonionizing nature and the distinctive optical response of various materials are important for analyzing diverse applications such as material quality control, pharmaceutical, industrial production lines, and biological. Upon that THz waves have been utilized for imaging and spectroscopy, especially Terahertz Time-­‐Domain Spectroscopy (THz-­‐TDS) associated to its ability in measuring the change in the electric field with high sensitivity in time-­‐domain. Surface plasmon-­‐polaritons (SPPs) at metal-­‐dielectric interfaces have been proven for several decades as a reliable technique for surface analysis and investigation of thin films due to the two dimensional nature of SPPs and the strong electromagnetic field at the interface. Extraordinary transmission of light through subwavelength hole arrays has attracted many areas of applications including optical data storage, near field microscopy, optical displays, and thin film sensing. The enhancement in the tunneled transmission light stemming from the coupling with SPP by the surface configurations has been explored through the waveguide theory and the grating theory of the frequency-­‐selective characteristic of SPP resonances. At THz frequencies, the extraordinary transmission through thin metallic hole arrays has been demonstrated through the excitation of SPP on the metal–dielectric interface confining the incident THz pulse around the holes, hence precluding THz pulse from easily passing and attenuating into the conductor. Implementing THz SPP in thin film sensing has great potential for industrial applications because the two dimensional nature of SPPs and the strong electromagnetic field at the interfacewith the THz natural reaction with the material provides reliable measurements of thin film spectroscopy including optical and dielectric constants, film thickness, and inhomogeneities at interfaces with high precision. This motivates the investigation of the characteristics such as purity of thin organic film including PMMA and those used in organic light emitting diode (OLED) through THz SPR devices. Two SPR devices contain either 2D periodic circular or square hole array in 500 nm Al on an 5 mm-­‐thick intrinsic silicon, or a single subwavelength aperture surrounded by concentric periodic grooves of a set period in a metal plate (which is known as a Bull’s eye structure), and was fabricated by following the micro-­‐ fabrications process encompassed from UV photolithography and wet and dry etching to transfer the pattern into the Al film. The SPR device consisting of 2D periodic circular or square hole array with and without thin Poly(methyl methacrylate) (PMMA) film on it is placed at the focus of the THz beam in transmission THz-­‐TDS, where the spectrum is obtained from the Fourier-­‐ transformed sample and reference THz pulses. The transmission is obtained from the ratio between the sample spectrum and reference spectrum, whereas the phase change is the phase difference between the two spectra. To avoid overlap with water absorption lines, the optimal SPR device design has a period of 320 μm and square holes of 150 μm side length. We successfully confirmed the theoretical SPR frequencies for metal-­‐silicon mode and demonstrate a shift to 0.9211 THz due to 2 μm of PMMA layer on the surface.