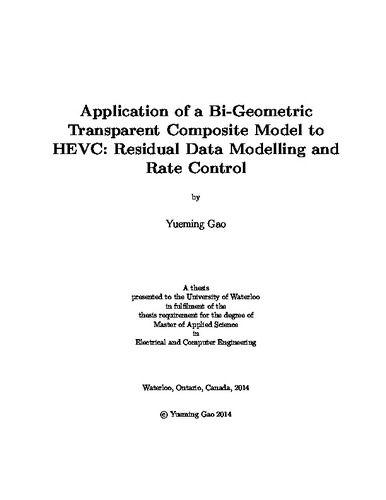 Among various transforms, the discrete cosine transform (DCT) is the most widely used one in multimedia compression technologies for different image or video coding standards. During the development of image or video compression, a lot of interest has been attracted to understand the statistical distribution of DCT coefficients, which would be useful to design compression techniques, such as quantization, entropy coding and rate control. Recently, a bi-geometric transparent composite model (BGTCM) has been developed to provide modelling of distribution of DCT coefficients with both simplicity and accuracy. It has been reported that for DCT coefficients obtained from original images, which is applied in image coding, a transparent composite model (TCM) can provide better modelling than Laplacian. In video compression, such as H.264/AVC, DCT is performed on residual images obtained after prediction with different transform sizes. What's more, in high efficiency video coding(HEVC) which is the newest video coding standard, besides DCT as the main transform tool, discrete sine transform (DST) and transform skip (TS) techniques are possibly performed on residual data in small blocks. As such, the distribution of transformed residual data differs from that of transformed original image data. In this thesis, the distribution of coefficients, including those from all DCT, DST and TS blocks, is analysed based on BGTCM. To be specific, firstly, the distribution of all the coefficients from the whole frame is examined. Secondly, in HEVC, the entropy coding is implemented based on the new encoding concept, coefficient group (CG) with size 4*4, where quantized coefficients are encoded with context models based on their scan indices in each CG. To simulate the encoding process, coefficients at the same scan indices among different CGs are grouped together to form a set. Distribution of coefficients in each set is analysed. Based on our result, BGTCM is better than other widely used distributions, such as Laplacian and Cauchy distributions, in both x^2 and KL-divergence testing. Furthermore, unlike the way based on Laplacian and Cauchy distribution, the BGTCM can be used to model rate-quantization (R-Q) and distortion-quantization (D-Q) models without approximation expressions. R-Q and D-Q models based on BGTCM can reflect the distribution of coefficients, which are important in rate control. In video coding, rate control involves these two models to generate a suitable quantization parameter without multi-passes encoding in order to maintain the coding efficiency and to generate required rate to satisfy rate requirement. In this thesis, based on BGTCM, rate control in HEVC is revised with much increase in coding efficiency and decrease in rate fluctuation in terms of rate variance among frames for constant bit rate requirement.