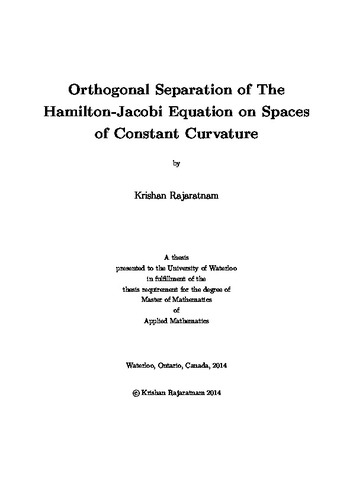 What is in common between the Kepler problem, a Hydrogen atom and a rotating black- hole? These systems are described by diﬀerent physical theories, but much information about them can be obtained by separating an appropriate Hamilton-Jacobi equation. The separation of variables of the Hamilton-Jacobi equation is an old but still powerful tool for obtaining exact solutions. The goal of this thesis is to present the theory and application of a certain type of conformal Killing tensor (hereafter called concircular tensor) to the separation of variables problem. The application is to spaces of constant curvature, with special attention to spaces with Euclidean and Lorentzian signatures. The theory includes the general applicability of concircular tensors to the separation of variables problem and the application of warped products to studying Killing tensors in general and separable coordinates in particular. Our ﬁrst main result shows how to use these tensors to construct a special class of separable coordinates (hereafter called Kalnins-Eisenhart-Miller (KEM) coordinates) on a given space. Conversely, the second result generalizes the Kalnins-Miller classiﬁcation to show that any orthogonal separable coordinates in a space of constant curvature are KEM coordinates. A closely related recursive algorithm is deﬁned which allows one to intrinsically (coordinate independently) search for KEM coordinates which separate a given (natural) Hamilton-Jacobi equation. This algorithm is exhaustive in spaces of constant curvature. Finally, suﬃcient details are worked out, so that one can apply these procedures in spaces of constant curvature using only (linear) algebraic operations. As an example, we apply the theory to study the separability of the Calogero-Moser system.