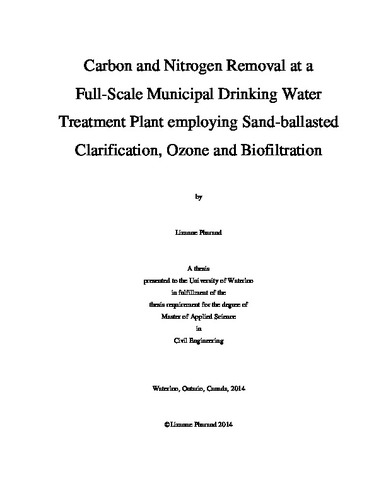 Natural organic matter (NOM) is composed of a complex matrix of organic compounds originating primarily from plant and animal degradation products, including both carbon and nitrogen, and is found in all natural waters. The removal of NOM in drinking water treatment plants is of importance as its presence is associated with qualities responsible for adverse aesthetic concerns such as colour, taste, and odour. It can also substantially impact treatment processes, as it has been shown to increase coagulant and disinfectant demand, corrosion and bacterial regrowth in distribution systems, and interfere with adsorption processes. More critically, certain NOM fractions have been identified as being precursors to potentially harmful disinfection by-products (DBPs) which over time can cause a variety of cancers in humans. The goal of this research was to determine the removal of carbon and nitrogen NOM components through a full-scale municipal drinking water treatment plant employing advanced treatment strategies aimed at reducing NOM, including sand-ballasted clarification (SBC), ozonation, and biological filtration (biofiltration). Investigation into the effect of seasonal changes in raw water quality and temperature on process performance, and determination of biofilter biomass quantity and activity were also carried out. The approach used to accomplish these goals involved sampling water and biofilter media from the Holmedale Water Treatment Plant (HWTP), located in Brantford, Ontario over a period of 14 consecutive months. NOM components were identified using a recently developed NOM characterization technique, liquid chromatography-organic carbon detection (LC-OCD), which fractionates NOM based on size and provides information about the concentration of five operationally defined NOM fractions. The fractions include biopolymers, humic substances, building blocks, low molecular weight (LMW) acids & humics, and LMW neutrals. The carbon fraction of NOM was quantified further using traditional water quality indicators, such as total organic carbon (TOC), dissolved organic carbon (DOC), assimilable organic carbon (AOC), ultraviolet absorbance at 254 nm (UVA254), and specific ultraviolet absorbance (SUVA). The nitrogen fraction of NOM was primarily investigated by quantification of inorganic nitrogen forms, such as total nitrogen, nitrate and ammonia. Throughout the sampling campaign, considerable removal of carbon compounds through sand-ballasted clarification was observed. Ozonation led to a substantial increase in AOC, which was anticipated (and for the most part removed through downstream biofiltration). The performance of both sand-ballasted clarification and ozone did not change considerably with seasonal temperature changes. The biofilters were capable of considerable removal of most carbon containing compounds, although the removal of certain fractions, suspected as being biodegradable, was reduced at cold raw water temperatures. Somewhat unexpectedly, no removal of total nitrogen, nitrate, or ammonia was observed through SBC, ozonation, and/or biofiltration. Due to the limited number of peer-reviewed articles on full-scale biofilter biomass characterization, investigation into the biomass quantity, as determined by adenosine triphosphate (ATP), and biomass activity, as determined by fluorescein diacetate (FDA) hydrolysis was undertaken. A review of the available literature demonstrated that the ATP concentration at the surface of active, acclimated biofilters (with granular activated carbon [GAC] or anthracite media) is typically in the order of 102-103 ng ATP/cm3 media. Compared to this benchmark, the biofilters at the HWTP appeared to contain a considerable quantity of active biomass. Nonetheless, results from the literature review and from this investigation demonstrate that no relationship exists between biofilter performance, in terms of organic matter removal, and ATP concentration at the surface of biofilters. Further investigation was also performed to determine if the biomass within the biofilters was receiving sufficient essential nutrients, namely carbon, nitrogen, and phosphorus, for growth. Determination of the carbon:nitrogen:phosphorus (CNP) ratio in the biofilter feed, and comparison to a widely accepted benchmark of roughly 100:10:1, suggested a potential phosphorus limitation. However, good biofilter performance, in terms of AOC removal, biomass quantity, and biomass activity was consistently observed. Still, no relationship between CNP ratio and biofilter performance, biomass quantity, and biomass activity could be identified. Somewhat unexpectedly, raw water temperature did not appear to impact the biomass quantity (ATP), activity (FDA), or the CNP ratio in the biofilter feed. The results from this research provide valuable information to municipal drinking water treatment providers whose plants employ SBC, ozone, or biofiltration. For the HWTP, although seasonal changes in raw water led to decreased biofilter performance for some monitored parameters, overall NOM removal through the plant remained considerable throughout the year. These findings provide insight to municipalities and consultants as it pertains to treatment process selection during the design or upgrade of drinking water treatment plants.