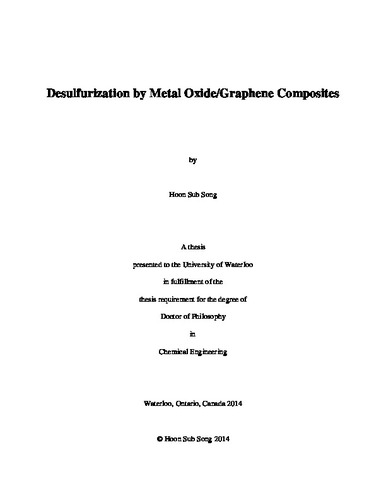 Desulfurization of liquid and gas phase sulfur compounds has been receiving dramatic attention since sulfur compounds cause environmental damages (especially acid rain) and pose industrial challenges (i.e. corrosion of equipment and deactivation of catalysts). This thesis has focused on the removal of liquid phase aromatic sulfur compounds (i.e. thiophene or dibenzothiophene (DBT)), as well as on the removal of gas phase hydrogen sulfide (H2S) through adsorption method by metal oxide/graphene composites. More specifically, the effects of graphene (or reduced graphite oxide) as a substrate were thoroughly investigated. For liquid phase sulfur removal, graphene which possesses π orbitals can adsorb aromatic sulfur compounds through π-π interactions. In addition, depending on the synthesis methods, higher quality graphene (i.e. thinner or larger graphene) could be obtained; and it improved the amount of DBT adsorption. For gas phase desulfurization (i.e. H2S adsorption), zinc oxide (ZnO) and reduced graphite oxide (rGO) composites have been studied. This study highlights the critical role of rGO as a substrate to enhance the H2S adsorption capacity. The presence of rGO with ZnO increases the surface area compared with pure ZnO since the oxygen functional groups on rGO prevent the aggregation of nano-sized ZnO particles for mid temperature sulfidation processes. The average particle size for pure ZnO was increased from 110 nm to 201 nm during the adsorption process while that for ZnO/rGO was maintained as 95 nm even after adsorption at 300°C. This contributes to explain that the presence of rGO with ZnO can enhance the H2S adsorption capacity from 31.7 mg S/g ads (for pure ZnO) to 172.6 mg S/g ads (for ZnO/rGO), that is more than a 5-fold increase. Morever, the presence of rGO with ZnO considerably improves the stability of the adsorbent; for multiple regeneration cycles at 600°C (in N2 environment), the adsorption capacity for ZnO/rGO stabilized at 93.1 mg S/g ads after the 8th cycle, while that for pure ZnO was nil after 5 cycles. The effects of copper (5, 10, 15, 20 and 25 mol%) with zinc oxide (ZnO) and reduced graphite oxide (rGO) composite on the hydrogen sulfide (H2S) adsorption capacity have also been studied. It was found that depending on the copper loading, the H2S adsorption capacity has been increased by up to 18 times compared to pure ZnO. In order to investigate the oxidation changes on copper and zinc oxides, crystallite analysis by XRD and chemical state analysis by XPS were performed. It was confirmed that the 2D rGO substrate, containing abundant oxygen functional groups, promoted the metal oxide dispersion and increased the H2S adsorption efficiency by providing loosely bonded oxygen ions to the sulfur molecules. In addition, it was determined that the optimum content of copper was 15 mol% relative to ZnO for maximizing the H2S adsorption. The 15% copper with ZnO/rGO led to the highest portion of zinc ions located in the Zn-O lattice; and led to the co-existence of Cu1+ and Cu2+ ions with ZnO. The H2S exposure at 300°C produces metal sulfides (i.e. zinc sulfide and copper sulfide) and sulfate ions.