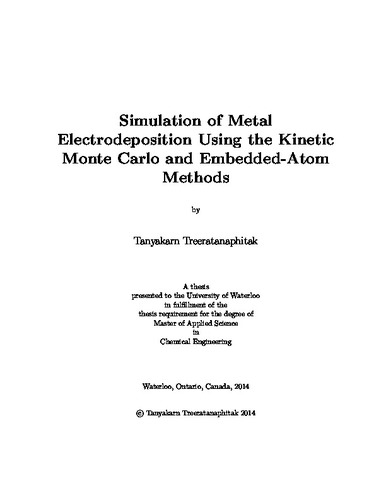 The effects of the microstructure of metal films on electric component performance and longevity have become increasingly important with the recent advances in nanotechnology. Depending on the application of the metal films and interconnects, certain microscopic structures and properties are preferred over others. A common method to produce these films and interconnects is through electrodeposition. As with every process, the ability to control the end product requires a detailed understanding of the system and the effect of operating conditions on the resulting product. To address this problem, a three-dimensional on-lattice kinetic Monte Carlo (KMC) method is developed to conduct atomistic simulations of single crystal and polycrystalline metal electrodeposition. The method utilizes the semi-empirical multi-body embedded-atom method (EAM) potential that accounts for the cohesive forces in a metallic system. The resulting computational method, KMC-EAM, enables highly descriptive simulations of electrodeposition processes to be performed over experimentally relevant scales. In this work, kinetically controlled copper electrodeposition onto single crystal copper under galvanostatic direct-current conditions and polycrystalline copper under potentiostatic direct-current conditions is modelled using the aforementioned KMC method. Four types of surface processes are considered during electrodeposition: deposition, dissolution, surface diffusion and grain boundary diffusion. The equilibrium microstructures from single crystal experiments were validated using molecular dynamics (MD) simulations through the comparison of energy per atom and average coordination number. The growth mode observed is in agreement with experimental results for the same orientation of copper. MD simulation relaxes constraints and approximations resulting from the use of KMC. Results indicate that collective diffusion mechanisms are essential in order to accurately model the evolution of coating morphology during electrodeposition. In the polycrystalline simulations, the effect of surface energy is taken into account in the propensities of deposition and dissolution. Sub-surface grain volume measurements were obtained from simulation results and the grain volume evolution with time is in agreement with both qualitative observations based on the deposit morphology and surface energy calculations. Simulations of polycrystalline deposition agree with findings from experimental studies that the evolution of the root-mean-squared roughness of the deposit during the early stages of deposition follows a power law relationship with respect to time $\approx t^{n}$. Furthermore, the power law exponent on time is determined to be $n \approx 0.5$, also in agreement with the experimental values reported in the literature.