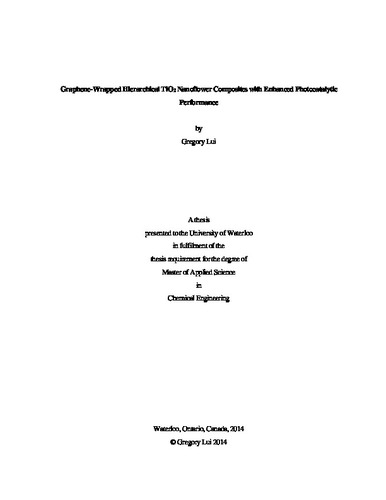 Increasing energy demands as well as the depletion of traditional energy sources has led to the need for the development and improvement of energy conversion and storage technologies. Concerns regarding climate change and environmental awareness has also created increased support for renewable energy and clean technology research. One technology of interest is the photocatalyst, which is a material that is able to use natural light irradiation to create electrical currents or drive useful chemical reactions. For this purpose, a strong photocatalytic material has the following properties: i) strong absorbance over a wide solar radiation spectrum; ii) high surface area for adsorbance of target species; iii) high electron efficiency characteristics such as high conductivity, long charge-carrier lifetimes, and direct pathways for electron transport; and iv) good chemical stability. All of these requirements serve to maximize the efficiency and overall output of the device, and are a means of overcoming the performance hurdle required for the commercialization of various energy conversion technologies. Unfortunately, current photocatalytic materials suffer from small absorbance windows and high recombination rates which greatly reduce the conversion efficiency of the catalyst. Titanium dioxide (TiO2), the most well-known and widely used photocatalyst, can only absorb light within the ultraviolet (UV) range – which accounts for only a small fraction of the entire solar spectrum. For this reason, the majority of recent research has been directed toward producing photocatalysts that are able to absorb light within the visible and infrared range in order to maximize the amount of light absorbed in the solar spectrum. Other research is also being conducted to increase electrical conductivity and charge-carrier separation to further increase conversion efficiency. It is hoped that these two major problems surrounding photocatalysis can be solved by using novel functional nanomaterials. Nanomaterials can be synthesized using three main techniques: crystal structuring, doping, and heterostructuring. By controlling the structure of the crystal, materials of different phase, morphology, and exposed crystal facets can be synthesized. These are important for controlling the electronic properties and surface reactivity of the photocatalyst. Doping is the act of introducing impurities into a material in order to modify its band structure and create a red shift in light absorption. Lastly, heterostructuring is a method used to combine different photocatalysts or introduce co-catalysts in order to widen the range of absorption, encourage charge separation, or both. Many novel photocatalytic materials have been synthesized using these techniques. However, the next-generation photocatalytic material has remained elusive due to the high cost of production and complexity of synthesis. This thesis proposes a novel photocatalytic material that can be used in photocatalyzed waste-water remediation. Graphene-wrapped hierarchical TiO2 nanoflowers (G-TiO2) are synthesized using a facile synthesis method. TiO2 is a material of particular interest due to its chemical and photo-corrosion stability, high redox potential, strong electronic properties, and relative non-toxicity. Hierarchical structures are highly desired because they are able to achieve both high surface area and high conductivities. Graphene hybridization is a popular method for creating composites with highly conductive networks and highly adsorptive surfaces. To the best of my knowledge, the hybridization of graphene on hierarchical TiO2 structures without pre-functionalization of TiO2 has not yet been demonstrated in literature. Therefore, it is proposed that the use of such a material would greatly simplify the synthesis process and enhance the overall photocatalytic performance of TiO2 over that of commercial TiO2 photocatalysts. In the first study, hierarchical TiO2 nanoflowers are synthesized using a solvothermal reaction. It is then shown that under UV irradiation, the hierarchical TiO2 material is able to outperform commercial TiO2 material in the photodegradation of methylene blue (MB). Further characterization shows that this improvement is explained by a higher electrical conductivity, and exists in spite of having a lower specific surface area compared to the commercial material. In the second study, G-TiO2 is synthesized by mixing hierarchical TiO2 nanoflowers with graphene oxide (GO) and reducing GO in a hydrothermal reaction. Photocatalytic tests show that this hybridization further improves the performance of the hierarchical TiO2. Further studies reveal that an optimal graphene loading of 5 wt% is desired in order to achieve the higher rate of MB decomposition, and greatly outperforms P25 in this task. Characterization shows that G-TiO2 composites have increased specific surface area and electrical conductivity compared to the hierarchical TiO2 nanoflower. It is believed that this work will provide a simple and efficient avenue for synthesizing graphene–TiO2 composites with greatly improved photocatalytic activity. This work may also find use in other photocatalytic applications such as chemical deconstruction and manufacturing, hydrogen production, solar cells, and solar enhanced fuel cells.