Design, synthesis, and evaluation of inhibitors of steroid sulfatase 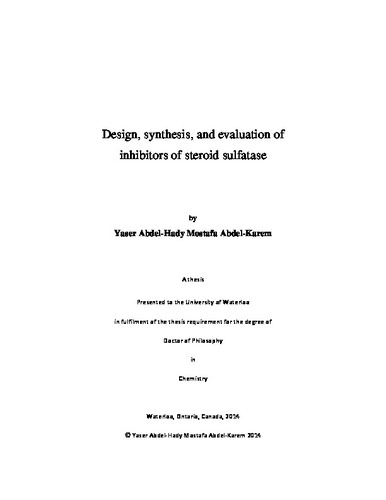 Steroid sulfatase (STS) catalyzes the desulfation of biologically inactive sulfated steroids to yield biologically active desulfated steroids and is currently being examined as a target for therapeutic intervention for the treatment of breast and other steroid-dependent cancers. A series of 17-arylsulfonamides of 17-aminoestra-1,3,5(10)-trien-3-ol were prepared and evaluated as inhibitors of STS. Introducing n-alkyl groups into the 4´-position of the 17-benzenesulfonamide derivative resulted in an increase in potency with the n-butyl derivative exhibiting the best potency with an IC50 of 26 nM. A further increase in carbon units (to n-pentyl) resulted in a decrease in potency. Branching of the 4´-n-propyl group resulted in a decrease in potency while branching of the 4´-n-butyl group (to a tert-butyl group) resulted in a slight increase in potency (IC50 = 18 nM). Studies with 17-benzenesulfonamides substituted at the 3´- and 4´-positions with small electron donating and electron withdrawing groups revealed the 3´-bromo and 3´-trifluoromethyl derivatives to be excellent inhibitors with IC50’s of 30 and 23 nM respectively. The 17-2´-naphthalenesulfonamide was also an excellent inhibitor (IC50 = 20 nM) while the 17-4´-phenylbenzenesulfonamide derivative was the most potent inhibitor with an IC50 of 9 nM. Kinetic studies with 3´-bromo derivative revealed it to be a non-competitive inhibitor and so these types of inhibitors might be capable of binding at the active site and also at a secondary site outside the active site. The amide analogs of some of these compounds were found not to be as potent inhibitors as the sulfonamides. Introducing a nitro group or fluorine atom into the 4-position of the 17-arylsulfonamide inhibitors resulted in an increase in potency. Some of these compounds are the most potent reversible STS inhibitors ever reported with apparent Ki’s as low as 1 nM. 3-O-Sulfation of these compounds did not significantly alter their potency. It is not known if 3-O-sulfated derivatives were acting as inhibitors or reversible suicide inhibitors. Docking studies were performed on selected inhibitors to gain insight into how they might interact with STS. Selected 17-arylsulfonamide inhibitors were sent to the NCI (USA) for in vitro screening with a panel of 60 human tumor cell lines (NCI-60 panel). Almost all of the compounds exhibited GI50’s in the 1 to 10 M range with all 60 cell lines and so were only moderately potent in terms of their ability to inhibit the growth. None of the compounds stood out in terms of their ability to inhibit the growth of any breast cancer, prostate cancer or any other cancer cell line studied. The thiadiazolidinedione group was proposed as a sulfate mimic for obtaining STS inhibitors. A new approach to the synthesis of 3-aminoestrone was achieved as part of an attempt to prepare the thiadiazolidinedione target. 3-O-Sulfamoylation of one of the 17-arylsulfonamide inhibitors was attempted using a variety of reaction conditions but was unsucce