Effective and Efficient Optimization Methods for Kernel Based Classification Problems 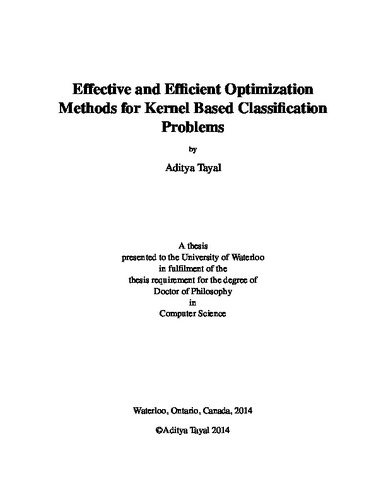 Kernel methods are a popular choice in solving a number of problems in statistical machine learning. In this thesis, we propose new methods for two important kernel based classification problems: 1) learning from highly unbalanced large-scale datasets and 2) selecting a relevant subset of input features for a given kernel specification. The first problem is known as the rare class problem, which is characterized by a highly skewed or unbalanced class distribution. Unbalanced datasets can introduce significant bias in standard classification methods. In addition, due to the increase of data in recent years, large datasets with millions of observations have become commonplace. We propose an approach to address both the problem of bias and computational complexity in rare class problems by optimizing area under the receiver operating characteristic curve and by using a rare class only kernel representation, respectively. We justify the proposed approach theoretically and computationally. Theoretically, we establish an upper bound on the difference between selecting a hypothesis from a reproducing kernel Hilbert space and a hypothesis space which can be represented using a subset of kernel functions. This bound shows that for a fixed number of kernel functions, it is optimal to first include functions corresponding to rare class samples. We also discuss the connection of a subset kernel representation with the Nystrom method for a general class of regularized loss minimization methods. Computationally, we illustrate that the rare class representation produces statistically equivalent test error results on highly unbalanced datasets compared to using the full kernel representation, but with significantly better time and space complexity. Finally, we extend the method to rare class ordinal ranking, and apply it to a recent public competition problem in health informatics. The second problem studied in the thesis is known as the feature selection problem in literature. Embedding feature selection in kernel classification leads to a non-convex optimization problem. We specify a primal formulation and solve the problem using a second-order trust region algorithm. To improve efficiency, we use the two-block Gauss-Seidel method, breaking the problem into a convex support vector machine subproblem and a non-convex feature selection subproblem. We reduce possibility of saddle point convergence and improve solution quality by sharing an explicit functional margin variable between block iterates. We illustrate how our algorithm improves upon state-of-the-art methods.