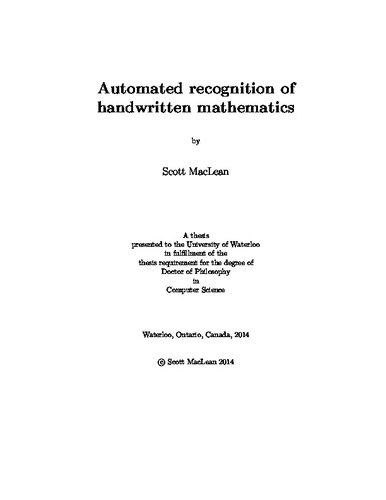 Most software programs that deal with mathematical objects require input expressions to be linearized using somewhat awkward and unfamiliar string-based syntax. It is natural to desire a method for inputting mathematics using the same two-dimensional syntax employed with pen and paper, and the increasing prevalence of pen- and touch-based interfaces causes this topic to be of practical as well as theoretical interest. Accurately recognizing two-dimensional mathematical notation is a difficult problem that requires not only theoretical advancement over the traditional theories of string-based languages, but also careful consideration of runtime efficiency, data organization, and other practical concerns that arise during system construction. This thesis describes the math recognizer used in the MathBrush pen-math system. At a high level, the two-dimensional syntax of mathematical writing is formalized using a relational grammar. Rather than reporting a single recognition result, all recognizable interpretations of the input are simultaneously represented in a data structure called a parse forest. Individual interpretations may be extracted from the forest and reported one by one as the user requests them. These parsing techniques necessitate robust tree scoring functions, which themselves rely on several lower-level recognition processes for stroke grouping, symbol recognition, and spatial relation classification. The thesis covers the recognition, parsing, and scoring aspects of the MathBrush recognizer, as well as the algorithms and assumptions necessary to combine those systems and formalisms together into a useful and efficient software system. The effectiveness of the resulting system is measured through two accuracy evaluations. One evaluation uses a novel metric based on user effort, while the other replicates the evaluation process of an international accuracy competition. The evaluations show that not only is the performance of the MathBrush recognizer improving over time, but it is also significantly more accurate than other academic recognition systems.