Characterization of the Behaviour of Solution-Responsive Polymers by Fluorescence 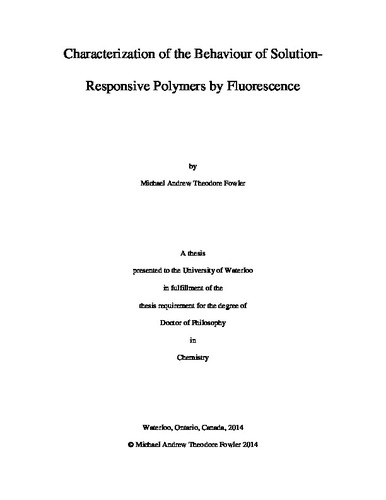 Two families of amphiphilic polymers were characterized with respect to their ability to respond to changing solution conditions using steady-state and time-resolved fluorescence. Firstly, a series of 5 sequential amphiphilic polypeptides consisting of hydrophilic and ionizable aspartic acid (Asp) and hydrophobic phenylalanine (Phe) in varying sequence (AspxPhey)n were studied. The effect of pH on the collapse and aggregation behaviour of the samples was investigated using light scattering which determined that the samples became insoluble when the fraction of ionized amino acids decreased below 0.2. Pyrene fluorescence measurments demonstrated that hydrophobic aggregate formation was the cause of this behaviour. The fluorescence and light scattering experiments yielded a detailed description of how pH affects the collapse and aggregation behaviour of amphiphilic polypeptides. Secondly, a series of poly(N-isopropylacrylamide) chains in aqueous solution, varying in length and end-labelled with pyrene (Py2-PNIPAM), were studied with respect to their temperature dependent solubility using turbidimetry, light scattering, and fluorescence. The cloud point temperature (Tc) of the Py2-PNIPAM samples was found to increase with increasing chain length. Steady-state fluorescence spectra yielded the ratio of excimer intensity to that of monomer intensity, or (IE/IM)SS, which reached a maximum at Tc. Time-resolved fluorescence decays were analyzed using Model-Free Analysis (MFA). The MFA yielded the average rate constant of excimer formation <k>, and the parameters fagg, fdiff and ffree, which reflect the molar fractions of pyrenes that form excimer from pre-formed aggregates, form excimer by diffusion, and do not form excimer, respectively. Increasing the temperature above Tc caused a strong decrease in <k> and ffree, and a sharp rise in fdiff, which is consistent with the formation of mesoglobules. Increasing the temperature above the dehydration temperature of unlabelled PNIPAM (Tm = 34 oC) caused the distribution of pyrene to stabilize. The third study focused on aqueous mixtures of Py2-PNIPAM and unlabelled PNIPAM, and their ability to mix when the temperature was raised above Tm. Using turbidimetry, separate transitions for Py2-PNIPAM and unlabelled PNIPAM were identified. Steady-state fluorescence of the labelled chains demonstrated separate (IE/IM)SS transitions for the labelled and unlabelled chains as well. The MFA of the time-resolved fluorescence decays yielded no transition in <k> at Tm, while fagg, fdiff and ffree showed transitions consistent with unlabelled PNIPAM entering the Py2-PNIPAM mesoglobules. This led to the conclusion that the two polymers are able to mix at and above Tm, and that the mesoglobules are not frozen and vitreous. Fourthly, a variety of pyrene-labelled polymers in organic solution were studied using steady-state and time-resolved fluorescence, where the results of Birks’ Scheme and the Fluorescence Blob Model (FBM) were compared to the results of the MFA. The MFA was found to be able to faithfully reproduce the results of the other, more established, models. In addition, the MFA allowed the calculation of (IE/IM)SPC, the ratio of excimer to monomer intensity as determined by time-resolved fluorescence, which scaled linearly with both (IE/IM)SS and <k>. From this it was concluded that the MFA is able to fit the decays of pyrene-labelled polymers with any architecture studied thus far, but also provides an absolute measure of IE/IM which can be reproduced in any lab.

Michael Fowler (2014). Characterization of the Behaviour of Solution-Responsive Polymers by Fluorescence. UWSpace. http://hdl.handle.net/10012/8325