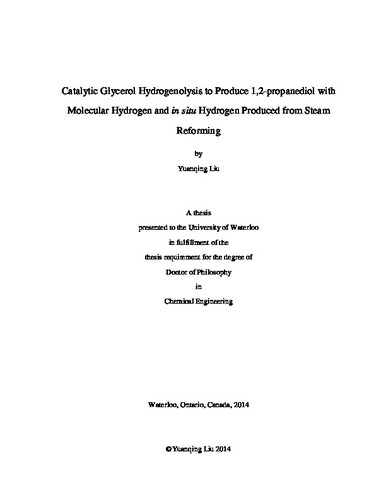 Biodiesel has shown great promise to supplement the fossil diesel since it is a renewable energy resource and is environmentally friendly. However, the major obstacle to biodiesel large scale commercialization is the high production cost; so converting glycerol, the by-product of a biodiesel process, into value-added products is an efficient way to promote biodiesel production. 1,2-propanediol (1,2PD), also known as propylene glycol, is an important commodity chemical used for many applications such as polyester resins, liquid detergents and anti-freeze. It can be produced via dehydration of glycerol into acetol followed by hydrogenation of acetol into 1,2PD using a bi-functional catalyst. Currently high pressure gaseous hydrogen added for hydrogenation causes safety issues as well as additional costs of hydrogen purchasing, transportation and storage. Therefore, the utilization of the in situ hydrogen produced by steam reforming of a hydrogen carrier could be a novel route for this process. In this work, processes of glycerol hydrogenolysis to produce 1,2PD have been developed using different hydrogen sources, i.e. molecular hydrogen and in situ hydrogen produced by steam reforming. Three different preparation methods were attempted to prepare a Cu/ZnO/Al2O3 catalyst in a glycerol hydrogenolysis process, which were oxalate gel-coprecipitation, Na2CO3 coprecipitation and impregnation. The catalyst prepared by oxalate gel-coprecipitation showed the highest activity for production of 1,2PD. It was also found that the addition of alumina did not only improve the activity but also enhanced the stability of the Cu/ZnO catalyst as shown by the catalyst recycling experiments. The morphological and chemical properties of the catalysts were characterized via XRD, NH3 TPD, TGA and TEM. Compared with other preparation methods, the Cu/ZnO/Al2O3 catalyst prepared by oxalate gel-coprecipitation exhibited a well-mixed form for all the metals as suggested by the XRD and TGA results; the particle size of the Cu/ZnO/Al2O3 catalyst was smaller as shown in the XRD and TEM results, and also based on NH3 TPD analysis the Cu/ZnO/Al2O3 catalyst showed stronger acidic sites. When Ni was loaded onto the Cu/ZnO/Al2O3 catalyst by oxalate gel-coprecipitation, it was found that the activity for acetol hydrogenation was improved but the overall glycerol hydrogenolysis reaction was slower. This was mainly due to the reduced amount of strong acidic sites caused by the addition of Ni as observed from the NH3 TPD results. 2wt% Pd supported on a Cu/MgO/Al2O3 catalyst was used in this process. Higher reaction rate and higher 1,2PD selectivity could be obtained compared with a Cu/ZnO/Al2O3 catalyst. However, a significant deactivation was observed when the spent catalyst was used. The catalyst deactivation was mainly due to catalyst sintering during the reaction resulting in a larger particle size as suggested by XRD results. The activation energies for the glycerol hydrogenolysis reaction using Cu/ZnO/Al2O3 and Pd supported on Cu/MgO/Al2O3 catalysts have been calculated. The activation energy was calculated to be 69.39kJ/mole using a Cu/ZnO/Al2O3 catalyst and 113.62kJ/mol using a Pd supported on Cu/MgO/Al2O3 catalyst. It is suggested that the reaction was chemically kinetically controlled using both catalysts and the reaction using the Pd supported on Cu/MgO/Al2O3 catalyst was more temperature dependent. It was found that the 1,2PD selectivity was strongly dependent on hydrogen pressure. The low 1,2PD selectivity at lower hydrogen pressure was due to the formation of by-products caused by side reactions with acetol. The kinetic data of acetol hydrogenation suggested that the acetol hydrogenation step was significantly faster than the overall reaction and hence the glycerol dehydration step was the rate-determining-step. In the glycerol hydrogenolysis process using in situ hydrogen, the activities of the Cu/ZnO/Al2O3 catalysts prepared by different methods were determined and the experimental results show that the catalyst prepared by oxalate gel-coprecipitation has the best catalytic activity for glycerol conversion and 1,2PD selectivity. With Ni loaded onto a Cu/ZnO/Al2O3 catalyst, the 1,2PD selectivity was improved and the glycerol conversion was lower. It might be because Ni could improve the steam reforming activity to produce more hydrogen, but due to the reduced strong acidic sites based on the NH3 TPD results glycerol conversion was decreased. Cu/MgO/Al2O3 catalysts prepared by oxalate gel-coprecipitation were used in this process and the activity was found to be higher, i.e. higher glycerol conversion and 1,2PD selectivity, compared with the Cu/ZnO/Al2O3 catalyst due to a higher amount of acidic sites based on the NH3 TPD results; the Cu/Mg/Al composition was optimized. When Ni was added into a Cu/MgO/Al2O3 catalyst, it was found that with only 1mole% Ni loaded, the glycerol conversion was lower than that without Ni loaded and the 1,2PD selectivity was slightly improved; when the Ni loading was increased to 5mole%, the catalyst was almost completely inactive, since when 5mole% Ni was loaded, the acidic sites were almost completely eliminated as observed from the NH3 TPD results. When Pd was added onto a Cu/MgO/Al2O3 catalyst the 1,2PD selectivity was significantly improved. When Pd was loaded, more surface hydrogen atoms were provided as observed from the H2 TPD results. Cu/ZnO/Al2O3 and Cu/MgO/Al2O3 catalysts have been recycled and reused to investigate the stability of the catalysts. All the catalysts were deactivated after they were recycled and reused, since it was apparent that catalyst sintering occurred during the reaction resulting in a larger particle size based on the XRD results. The deactivation of the spent catalyst was also possibly due to the formation of carbonate when the metals were contacted with CO2 which was formed via steam reforming.