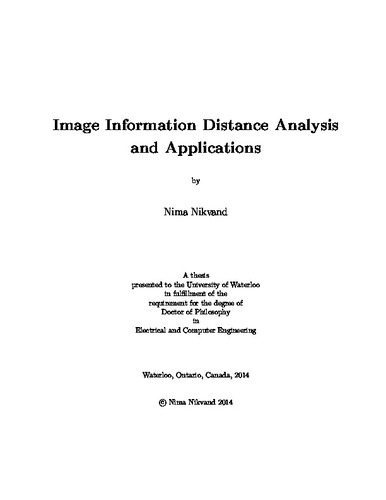 Image similarity or distortion assessment is fundamental to a broad range of applications throughout the field of image processing and machine vision. These include image restoration, denoising, coding, communication, interpolation, registration, fusion, classification and retrieval, as well as object detection, recognition, and tracking. Many existing image similarity measures have been proposed to work with specific types of image distortions (e.g., JPEG compression). There are also methods such as the structural similarity (SSIM) index that are applicable to a wider range of applications. However, even these "general-purpose" methods offer limited scopes in their applications. For example, SSIM does not apply or work properly when significant geometric changes exist between the two images being compared. The theory of Kolmogorov complexity provides solid groundwork for a generic information distance metric between any objects that minorizes all metrics in the class. The Normalized Information Distance (NID) metric provides a more useful framework. While appealing, the challenge lies in the implementation, mainly due to the non-computable nature of Kolmogorov complexity. To overcome this, a Normalized Compression Distance (NCD) measure was proposed, which is an effective approximation of NID and has found successful applications in the fields of bioinformatics, pattern recognition, and natural language processing. Nevertheless, the application of NID for image similarity and distortion analysis is still in its early stage. Several authors have applied the NID framework and the NCD algorithm to image clustering, image distinguishability, content-based image retrieval and video classification problems, but most reporting only moderate success. Moreover, due to their focuses on ! specific applications, the generic property of NID was not fully exploited. In this work, we aim for developing practical solutions for image distortion analysis based on the information distance framework. In particular, we propose two practical approaches to approximate NID for image similarity and distortion analysis. In the first approach, the shortest program that converts one image to another is found from a list of available transformations and a generic image similarity measure is built on computing the length of this shortest program as an approximation of the conditional Kolmogorov complexity in NID. In the second method, the complexity of the objects is approximated using Shannon entropy. Specifically we transform the reference and distorted images into wavelet domain and assume local independence among image subbands. Inspired by the Visual Information Fidelity (VIF) approach, the Gaussian Scale Mixture (GSM) model is adopted for Natural Scene Statistics (NSS) of the images to simplify the entropy computation. When applying image information distance framework in real-world applications, we find information distance measures often lead to useful features in many image processing applications. In particular, we develop a photo retouching distortion measure based on training a Gaussian kernel Support Vector Regression (SVR) model using information theoretic features extracted from a database of original and edited images. It is shown that the proposed measure is well correlated with subjective ranking of the images. Moreover, we propose a tone mapping operator parameter selection scheme for High Dynamic Range (HDR) images. The scheme attempts to find tone mapping parameters that minimize the NID of the HDR image and the resulting Low Dynamic Range (LDR) image, and thereby minimize the information loss in HDR to LDR tone mapping. The resulting images created by minimizing NID exhibit enhanced image quality.