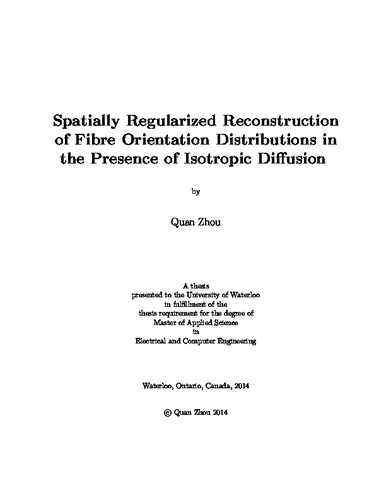 The connectivity and structural integrity of the white matter of the brain is known to be implicated in a wide range of brain-related diseases and injuries. However, it is only since the advent of diffusion magnetic resonance imaging (dMRI) that researchers have been able to probe the miscrostructure of white matter in vivo. Presently, among a range of methods of dMRI, high angular resolution diffusion imaging (HARDI) is known to excel in its ability to provide reliable information about the local orientations of neural fasciculi (aka fibre tracts). It preserves the high angular resolution property of diffusion spectrum imaging (DSI) but requires less measurements. Meanwhile, as opposed to the more traditional diffusion tensor imaging (DTI), HARDI is capable of distinguishing the orientations of multiple fibres passing through a given spatial voxel. Unfortunately, the ability of HARDI to discriminate neural fibres that cross each other at acute angles is always limited. The limitation becomes the motivation to develop numerous post-processing tools, aiming at the improvement of the angular resolution of HARDI. Among such methods, spherical deconvolution (SD) is the one which attracts the most attentions. Due to its ill-posed nature, however, standard SD relies on a number of a priori assumptions needed to render its results unique and stable. In the present thesis, we introduce a novel approach to the problem of non-blind SD of HARDI signals, which does not only consider the existence of anisotropic diffusion component of HARDI signal but also explicitly take the isotropic diffusion component into account. As a result of that, in addition to reconstruction of fODFs, our algorithm can also yield a useful estimation of its related IDM, which quantifies a relative contribution of the isotropic diffusion component as well as its spatial pattern. Moreover, one of the principal contributions is to demonstrate the effectiveness of exploiting different prior models for regularization of the spatial-domain behaviours of the reconstructed fODFs and IDMs. Specifically, the fibre continuity model has been used to force the local maxima of the fODFs to vary consistently throughout the brain, whereas the bounded variation model has helped us to achieve piecewise smooth reconstruction of the IDMs. The proposed algorithm is formulated as a convex minimization problem, which admits a unique and stable minimizer. Moreover, using ADMM, we have been able to find the optimal solution via a sequence of simpler optimization problems, which are both computationally efficient and amenable to parallel computations. In a series of both in silico and in vivo experiments, we demonstrate how the proposed solution can be used to successfully overcome the effect of partial voluming, while preserving the spatial coherency of cerebral diffusion at moderate to severe noise levels. The performance of the proposed method is compared with that of several available alternatives, with the comparative results clearly supporting the viability and usefulness of our approach. Moreover, the results illustrate the power of applied spatial regularization terms.