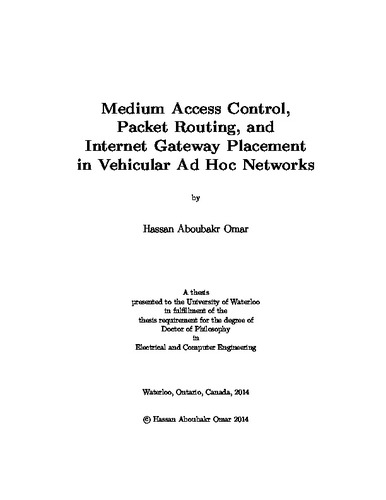 Road accidents represent a serious social problem and are one of the leading causes of human death and disability on a global scale. To reduce the risk and severity of a road accident, a variety of new safety applications can be realized through wireless communications among vehicles driving nearby each other, or among vehicles and especially deployed road side units (RSUs), a technology known as a vehicular ad hoc network (VANET). Most of the VANET-enabled safety applications are based on broadcasting of safety messages by vehicles or RSUs, either periodically or in case of an unexpected event, such as a hard brake or dangerous road condition detection. Each broadcast safety message should be successfully delivered to the surrounding vehicles and RSUs without any excess delay, which is one of the main functions of a medium access control (MAC) protocol proposed for VANETs. This thesis presents VeMAC, a new multichannel time division multiple access (TDMA) protocol specifically designed to support the high priority safety applications in a VANET scenario. The ability of the VeMAC protocol to deliver periodic and event-driven safety messages in VANETs is demonstrated by a detailed delivery delay analysis, including queueing and service delays, for both types of safety messages. As well, computer simulations are conducted by using MATLAB, the network simulator ns-2, and the microscopic vehicle traffic simulator VISSIM, in order to evaluate the performance of the VeMAC protocol, in comparison with the IEEE 802.11p standard and the ADHOC MAC protocol (another TDMA protocol proposed for ad hoc networks). A real city scenario is simulated and different performance metrics are evaluated, including the network goodput, protocol overhead, channel utilization, protocol fairness, probability of a transmission collision, and safety message delivery delay. It is shown that the VeMAC protocol considerably outperforms the existing MAC schemes, which have significant limitations in supporting VANET safety applications. In addition to enhancing road safety, in-vehicle Internet access is one of the main applications of VANETs, which aims at providing the vehicle passengers with a low-cost access to the Internet via on-road gateways. This thesis presents a new strategy for deploying Internet gateways on the roads, in order to minimize the total cost of gateway deployment, while ensuring that a vehicle can connect to an Internet gateway (using multihop communications) with a probability greater than a specified threshold. This cost minimization problem is formulated by using binary integer programming, and applied for optimal gateway placement in a real city scenario. To the best of our knowledge, no previous strategy for gateway deployment has considered the probability of multihop connectivity among the vehicles and the deployed gateways. In order to allow a vehicle to discover the existence of an Internet gateway and to communicate with the gateway via multihops, a novel data packet routing scheme is proposed based on the VeMAC protocol. The performance of this cross-layer design is evaluated for a multichannel VANET in a highway scenario, mainly in terms of the end-to-end packet delivery delay. The packet queueing at each relay vehicle is considered in the end-to-end delay analysis, and numerical results are presented to study the effect of various parameters, such as the vehicle density and the packet arrival rate, on the performance metrics. The proposed VeMAC protocol is a promising candidate for MAC in VANETs, which can realize many advanced safety applications to enhance the public safety standards and improve the safety level of drivers/passengers and pedestrians on roads. On the other hand, the proposed gateway placement strategy and packet routing scheme represent a strong step toward providing reliable and ubiquitous in-vehicle Internet connectivity.