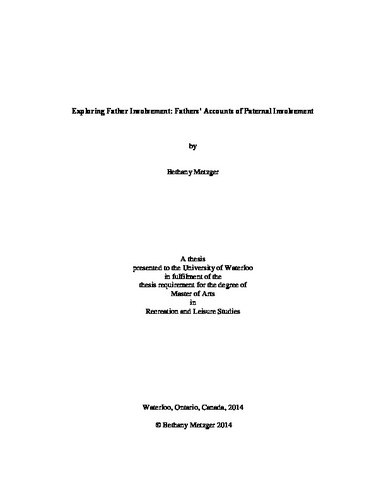 Fathers with children at home account for a substantial portion of the Canadian population. In contemporary Canada, a father’s role no longer consists of distant breadwinning, but rather actively engaging in a family-centered lifestyle and being more involved in child care. Extensive research has focused primarily on the experiences of mothers and given very little attention to involved fathers. This study sought out to explore how fathers understand and describe involved fatherhood. Six participants, who identified as engaged fathers, participated in conversational interviews. The findings suggest that daily interaction through child rearing and playing with children was viewed as part of the father role. As a result, fathers adjusted their paid work and leisure pursuits in order to “be there” for their children. Fathers resisted dominant gendered ideologies through completing ‘feminine’ domestic chores, providing emotional care, and taking full responsibility for children’s care throughout the week. Fathers also reproduced gendered norms, particularly during children’s play, and by not taking paid parental leave. This research found that fathers resisted and reproduced gendered roles, and negotiated numerous constraints to meet their fathering responsibilities, which did not consist of solely playing with children. Fathers’ involvement level is greatly influenced by leave policies in Canada; therefore changes to leave policies and pay equity are needed to support increased father involvement.