Modeling of Renewable Resources in Distribution System Planning and Operation 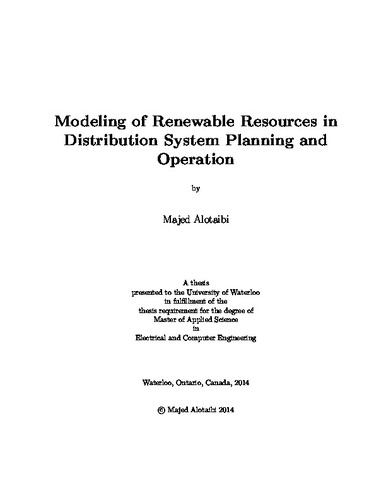 In recent decades, interest in placing renewable resources in conventional power systems has increased because of their ability to reduce fossil fuel consumption, which leads to the preservation of the environment. The rapid increase in employing these renewable resource-based DGs drives the system to be more dynamic, and causes many obstacles that need to be overcome. Power system planners and operators should look at the distribution system from another angle, taking into consideration the intermittent behavior of most renewable resources. Furthermore, solid models that are able to handle the uncertainty in generation levels are required. This thesis presents a comprehensive probabilistic model for representing renewable energy resources in long term planning problems. This model utilized large historical data sets, grouping technique, and statistical analysis in order to handle the fluctuations that are caused by the variations in wind speed or solar irradiance. In this research, renewable resources (wind and PV based DGs) ae well as dispatchable units are optimally allocated and sized using a probabilistic optimization model. This model incorporates the intermittent nature of wind speed and solar radiation into the deterministic optimal power flow equations. The variability from the load side and the uncertainty from the feeding side are considered. Genetic algorithm is used in order to minimize the annual energy losses of a distribution system. This thesis proposes a new iterative-based optimization algorithm is proposed in order to determine the minimum number of states that can precisely describe or represent the behavior of wind speed and solar irradiance in operational planning problems. This algorithm is evaluated using a power system planning problem. The proposed algorithm takes into account the annual energy losses and the total DG penetration level and considers them as an indication of how far the proposed method's outcomes are from the actual results. Three di fferent data groupings are applied (hourly, seasonally, and yearly) to investigate the variety of weather and electricity demands on the proposed method. The obtained results should be maintained within an acceptable limit of error which is in this thesis, 2:5%, and any violation of this limit will interrupt the algorithm sequences. The importance of this method actually lies in its ability to reduce the complexity in reliability analysis such that the number of overall system states will be minimized when the analytical evaluation methods are utilized.