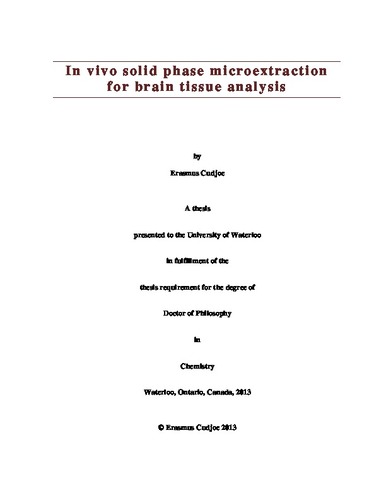 New solid phase microextraction (SPME) method was developed for brain tissue bioanalysis on a liquid chromatography mass spectrometry platform. To achieve set objectives, in vivo SPME desorption process was optimized for high throughput analysis through the development of a desorption device. Subsequently, new SPME coatings were developed for the extraction of polar neurotransmitters from biological matrices. In a targeted analysis, in vivo SPME was used to monitor of changes in the concentrations of endogenous compounds (multiple neurotransmitters) and exogenous drugs (carbamazepine and cimetidine) in the striatum of the rat brain extracellular fluid. For the first time, SPME was used for quantitative analysis of neurotransmitters and also study spacial distribution of other drugs in different regions of the brain extracellular fluid. A new approach was developed for improved metabolites coverage in a global non-targeted metabolomics studies. The proposed in vivo method showed how complementary results can be obtained through the combination of microdialysis and SPME for simultaneous sampling of the brain extracellular fluid. Finally, in a clinical application, SPME was used to monitor changes in the concentration of multiple neurotransmitters during deep brain stimulation of the pre-frontal cortex of the brain.