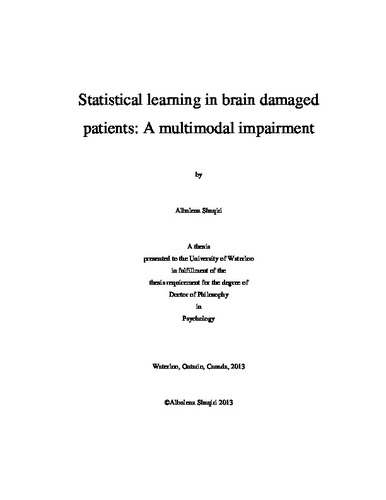 Spatial neglect has mainly been described through its spatial deficits (such as attentional bias, disengagement deficit or exploratory motor behavior), but numerous other studies have reported non-spatial impairments in patients suffering from this disorder. In the present thesis, non-spatial deficits in neglect are hypothesized to form a core impairment, which can be summarized as a difficulty to learn and benefit from regularities in the environment. The different studies conducted and reported in the present thesis have converged to support this hypothesis that neglect patients have difficulty to interact with environmental statistics. The two first studies, which tested the visual modality (Chapters 2 and 3), have demonstrated that neglect patients have difficulties to become faster to respond to targets that appear successively at the same location (position priming). This difficulty is also more generic, as neglect patients do not learn that some things occur more often than others, such as for example that a target has a high probability to be repeated at a specific region. Those two studies have shown that neglect patients are impaired in position priming and statistical learning, which corresponds to difficulties benefiting from regularities presented in the visual domain. This difficulty may be explained by patients’ impairment in working memory or temporal processing. Several studies have reported the implication of those two mechanism in statistical learning: if patients tend to underestimate the time that a target is presented on the screen and have difficulties keeping in memory its precedent location, this translates into a difficulty to benefit from the repeats of the target position as well as a difficulty to benefit from transition probability. In order to verify if priming and statistical learning impairments were specific to the visual modality or if neglect patients present a multimodal difficulty to learn the transition probability in general, brain damaged patients were tested in the auditory domain (Chapter 5), with a paradigm that has shown statistical learning in infants. This study confirmed that for the auditory modality too, brain damaged patients are impaired in statistical learning. The different results of the studies reported in Chapters 2, 3, 4 and 5 converge to support the hypothesis that spatial neglect patients have difficulties benefiting from regularities of their environment. Nevertheless, this impairment is not irreversible, as it was demonstrated by a chronic neglect patient who was trained with three sessions distributed over three days (Chapter 2). Although having similar results to the other patients for the first session, this patients’ performance improved over the sessions to show a faster reaction time for the targets presented on the high probability region (his contralesional side). Therefore, priming and statistical learning investigated in this thesis are worth exploring further for their potential outcome in the rehabilitation domain.