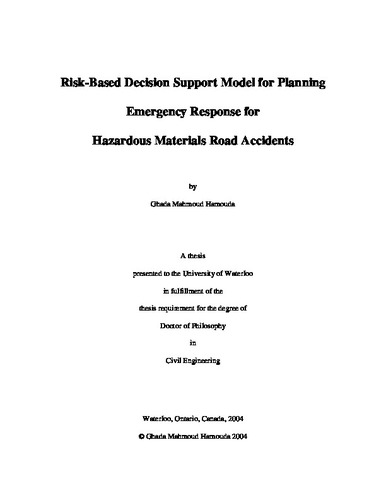 Hazardous Materials (HazMat) are transported throughout Canada in a great number of road shipments. The transportation of HazMat poses special risks for neighboring population and environment. While HazMat accidents are rare events, they could be catastrophic in nature and could result in substantial damage to nearby communities. Effective emergency response plays an important role in the safe transportation of HazMat. Transportation of HazMat involves different parties, including shippers, regulators, and surrounding communities. While the shipping party is responsible for safe delivery of HazMat shipments, it is the responsibility of local emergency service agencies to respond to accidents occurring within their jurisdictions. In this research, the emergency response to HazMat transport accidents is assumed to be delegated exclusively to specially trained and equipped HazMat teams. This research proposes a new comprehensive systematic approach to determine the best location of HazMat teams on regional bases utilizing HazMat transport risk as a location criterion. The proposed model is the first to consider emergency response roles in HazMat transport risk analysis, and was intended as an optimization tool to be used by practitioners for HazMat emergency response planning. Additionally, the proposed model can be used to assess risk implications in regards to current locations of HazMat teams in a region, and to develop effective strategies for locating HazMat teams, such as closing and/or relocating teams in the region. The model investigates how HazMat team locations can be tailored to recognize the risk of transporting HazMat and would provide a more objective set of input alternatives into the multi-criteria decision making process of regionally locating HazMat teams. The proposed model was applied to the region of southwestern Ontario in effort to illustrate its features and capabilities in the HazMat emergency response planning and decision making process. Accordingly, the model provided very useful insights while reviewing several HazMat team location strategies for the southwestern Ontario region and investigating tradeoff among different factors. This research contributes to a better understanding of emergency response roles by reducing HazMat transport risks, and will greatly benefit both researchers and practitioners in the field of HazMat transport and emergency response.