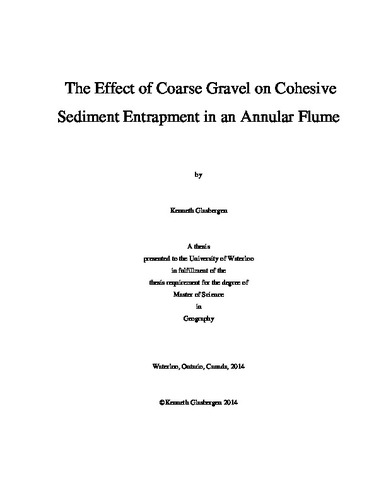 The amount and type of cohesive sediment found in gravel river beds can have important implications for the health of aquatic biota, surface/groundwater interactions and water quality. Due to landscape disturbances in the Elbow River watershed, increased sediment fluxes have negatively impacted fish habitat, water quality and water supply to the City of Calgary. However, little is known about the source of cohesive sediment and its interaction with gravel deposits in the Elbow River. This research was designed to: 1) quantify the transport properties (critical shear stress for erosion, deposition, porosity, settling velocity, density) of cohesive sediment and 2) evaluate the potential for coarse gravel to entrap cohesive sediment in the Elbow River. A 5m annular flume was used to conduct erosion and deposition experiments using plane and coarse bed conditions. The critical shear stress for deposition and erosion of the Elbow River cohesive sediments was 0.115Pa and 0.212Pa, respectively. The settling velocity of the cohesive sediment had an inverse relationship between floc size and settling velocity for larger flocs, due to a decrease in floc density with increased size. Cohesive sediment moved from the water column into the gravel bed via the coupling of surface and pore water flow. Once in the gravel bed, cohesive sediments were not mobilized from the bed because the shear produced by the flume was less than the critical shear to mobilize the gravel bed. Using a model developed by Krishnappan and Engel (2006), an entrapment coefficient of 0.2 was determined for the gravel bed. Entrapment coefficients were plotted against substrate size, porosity and hydraulic conductivity, demonstrating a relationship between entrapment coefficient and these variables. It was estimated that 864kg of cohesive sediment is stored in the upper 0.08m of a partially submerged point bar in the Elbow River. Accordingly, when flow conditions are sufficient to mobilize the gravel bed and disturb the amour layer, cohesive materials may be entrained and transported into the Glenmore Reservoir, where it will reduce reservoir capacity and may pose treatment challenges to the drinking water supply.