Motivational Differences in Aiming for Wide or Narrow Goals 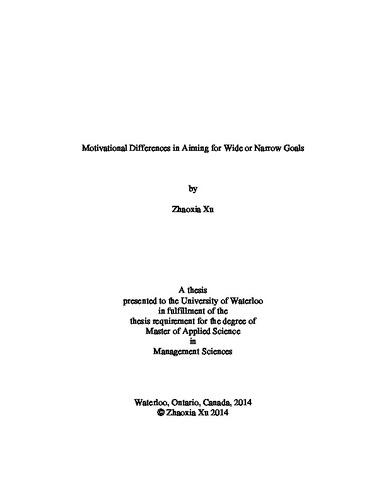 Goal setting theory has consistently found that high and specific goals lead to better performance than low and vague goals do. However, the independent effect of each of these two dimensions, difficulty and specificity, on performance is less clear. Although goal difficulty has been shown to affect performance level independent of goal specificity, evidence for an independent effect of goal specificity is mixed. In the current research, we introduce a moderator, regulatory focus, of the relationship between goal specificity and performance level. Specifically, we hypothesized that people in a promotion focus would be more motivated by aiming for wider goals that have a higher possibility of success and therefore fit an eager-approach strategy, while people in a prevention focus would be more motivated by aiming for narrower goals that have a small range of acceptable outcomes and therefore fit a vigilant-avoidance strategy. We examined this hypothesis with different hypothetical scenarios that manipulated goal width (wide versus narrow) with numerical ranges (Study 1) and visually with a bar graph (Study 2), and with different behavioural tasks that manipulated goal width in a saving strategies task (Study 3) and an anagram task (Study 4a, 4b). The findings revealed promising trends that were consistent with our hypothesis across all studies.