Nanofabrication and its application in plasmonic chemical and bio-sensors 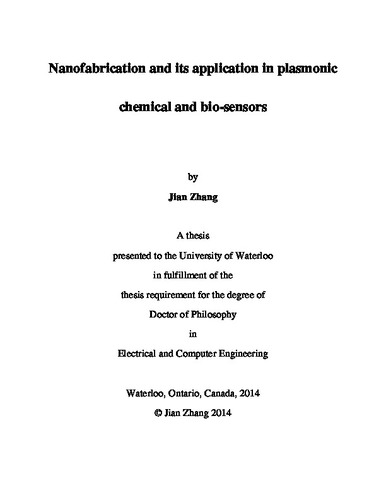 This thesis is focused on nanofabrication and its application in plasmonic chemical and bio- sensors. The contribution thus is the development of novel nanofabrication techniques and nano- structures for the sensors based on surface plasmon (SP). Part I (Chapter 1-3) is about novel nanofabrication techniques, especially nanoimprint lithography (NIL) and electron beam lithography (EBL). For NIL, the four major aspects of NIL were discussed, including the resist, mold, imprint process and equipment for NIL. Combined with NIL and soft lithography, hybrid nanoimprint-soft lithography was investigated. To overcome the difficulty of mold fabrication, a more robust solution of mold fabrication through a sacrificial poly(dimethyl glutarimide) (PMGI) master mold was designed in this work. Based on this method, the mold was fabricated without structure distortion, and pattern replication with sub-10 nm resolution was demonstrated. For EBL, several aspects were discussed to improve the performance of EBL, including the resist, development, and exposure condition. The charging effect to the pattern distortion was studied systemically for the electron beam exposure in large area with high current (>nA). Tilted periodic nanostructure was achieved by electron beam scanning on tilted sample with dynamic focus mode. EBL on irregular surface was realized by the exposure on evaporated polystyrene. Part II (Chapter 4-6) is the application in surface plasmonic chemical and bio-sensors. The first type of sensors is surface enhanced Raman scattering (SERS) sensor based on localized SP. Bowtie-shape nano-antenna structures of sub-10 nm gap were fabricated with the breakthrough of EBL resolution to 3 nm by exposing resist on Si3N4 membrane. By controlling the gap size during lithography, the surface plasmon enhancement was tuned accurately. High sensitivity of Au bowties antenna with sub-10 nm gap was achieved at low concentration of the target molecule (10^-7 mM, 1,2-di(4-pyridyl)ethylene in ethanol solution) and high enhancement of 10^7 resulting from the corresponding bowtie structure. The second type of sensors is extraordinary optical transmission (EOT) sensor based on propagating SP. The process of double liftoff was developed for the fabrication of nano-hole arrays on 100 nm-thick Au film utilizing EBL. This technique is versatile for the fabrication of many kinds of high-aspect-ratio noble metal structures. Additionally, annealing method was employed in this work to improve the smoothness of Au film. It was found that the RMS roughness of the deposited film was reduced by 72 % and the sensitivity was increased by 32 nm/RIU as a result of annealing. It was also found that the optical transmission intensity of the annealed NHA of similar hole diameter was increased more than twice which is due to the smaller absorption/scattering of the incident light and surface waves from the Au film surface. Besides the double liftoff process, several techniques were developed for EOT structures, including electroplating, imprint method, and deposition on membrane.

Jian Zhang (2014). Nanofabrication and its application in plasmonic chemical and bio-sensors. UWSpace. http://hdl.handle.net/10012/8286