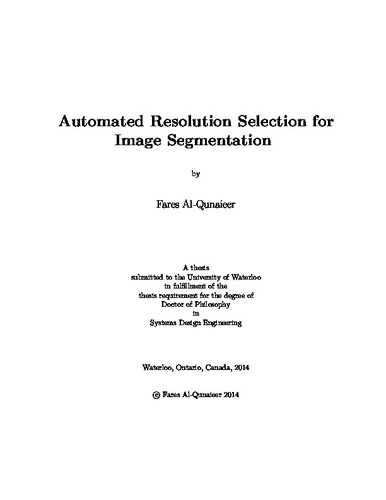 It is well known in image processing in general, and hence in image segmentation in particular, that computational cost increases rapidly with the number and dimensions of the images to be processed. Several fields, such as astronomy, remote sensing, and medical imaging, use very large images, which might also be 3D and/or captured at several frequency bands, all adding to the computational expense. Multiresolution analysis is one method of increasing the efficiency of the segmentation process. One multiresolution approach is the coarse-to-fine segmentation strategy, whereby the segmentation starts at a coarse resolution and is then fine-tuned during subsequent steps. Until now, the starting resolution for segmentation has been selected arbitrarily with no clear selection criteria. The research conducted for this thesis showed that starting from different resolutions for image segmentation results in different accuracies and speeds, even for images from the same dataset. An automated method for resolution selection for an input image would thus be beneficial. This thesis introduces a framework for the selection of the best resolution for image segmentation. First proposed is a measure for defining the best resolution based on user/system criteria, which offers a trade-off between accuracy and time. A learning approach is then described for the selection of the resolution, whereby extracted image features are mapped to the previously determined best resolution. In the learning process, class (i.e., resolution) distribution is imbalanced, making effective learning from the data difficult. A variant of AdaBoost, called RAMOBoost, is therefore used in this research for the learning-based selection of the best resolution for image segmentation. RAMOBoost is designed specifically for learning from imbalanced data. Two sets of features are used: Local Binary Patterns (LBP) and statistical features. Experiments conducted with four datasets using three different segmentation algorithms show that the resolutions selected through learning enable much faster segmentation than the original ones, while retaining at least the original accuracy. For three of the four datasets used, the segmentation results obtained with the proposed framework were significantly better than with the original resolution with respect to both accuracy and time.