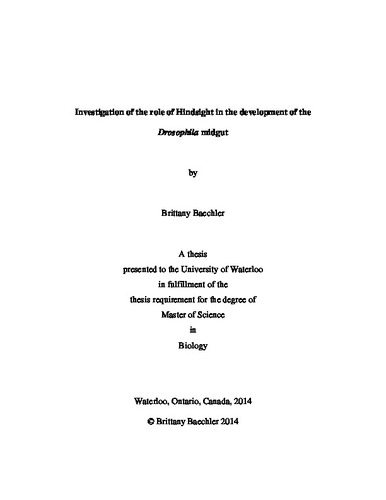 The Drosophila adult midgut is maintained through the division and differentiation of a population of intestinal stem cells (ISCs) (Issigonis and Matunis, 2010). The epithelial cells of the adult midgut are derived from adult midgut progenitors (AMPs), which are specified during embryogenesis, and remain in an undifferentiated state throughout larval stages by forming a transient niche (Mathur et al., 2010a). After puparium formation, the AMPs differentiate to form absorptive enterocyte (EC) cells, secretory enteroendocrine (EE) cells, or remain in an undifferentiated state as ISCs. The ISCs can then divide and differentiate throughout adulthood in order to regenerate and maintain the intestinal epithelium (Issigonis and Matunis, 2010). Notch signaling and Epiderminal growth factor receptor (EGFR) signaling have been shown to play important roles in controlling cell proliferation and differentiation in the larval and adult midgut (Ohlstein and Spradling, 2007)(Xu et al., 2011). In the larval midgut, Notch signaling is required for peripheral cell differentiation and formation of the transient niche. In the adult midgut, Notch signaling is required for limiting ISC proliferation, and for promoting EC differentiation (Ohlstein and Spradling, 2007). EGFR signaling has been shown to be required for promoting AMP and ISC divisions in the larval and adult midgut, respectively, and it is also necessary for maintenance of the ISC population (Jiang and Edgar, 2009)(Xu et al., 2011). The putative transcription factor Hindsight (Hnt) is a nuclear zinc-finger protein (Sun and Deng, 2007)(Wilk et al., 2004) that has been shown to be a direct transcriptional target of the Notch signaling pathway (Krejcí et al., 2009). Hnt is expressed in numerous tissues and has been implicated in a number of processes including the maintenance of epithelial integrity (Wilk et al., 2004) as well as promoting mitosis to endocycle transitions and cell differentiation (Sun and Deng, 2007). After discovering that Hnt is expressed throughout the larval and adult midgut, this prompted further investigation of its role in the development and maintenance of these tissues. Using the GAL4/UAS system of inducible gene expression, we have shown that overexpression of Hnt was sufficient to promote premature differentiation of AMPs and ISCs into the Notch signaling-dependent ECs, likely downstream of Notch. In addition, RNAi-mediated knockdown of hnt revealed that expression of Hnt was necessary for the maintenance of stem cells in both the adult and larval midgut. We have also shown that EGFR signaling is required for maintaining Hnt expression in the ISCs, and that Hnt is required for promoting EC differentiation downstream of EGFR. These results suggest that Hnt is involved in mediating the EGFR and Notch signaling pathways in order to maintain the ISC population and to promote EC differentiation.

Brittany Baechler (2014). Investigation of the role of Hindsight in the development of the Drosophila midgut. UWSpace. http://hdl.handle.net/10012/8278