Biomechanics of Lateral Hip Impacts: the Influence of Measurement Technique and Contact Area 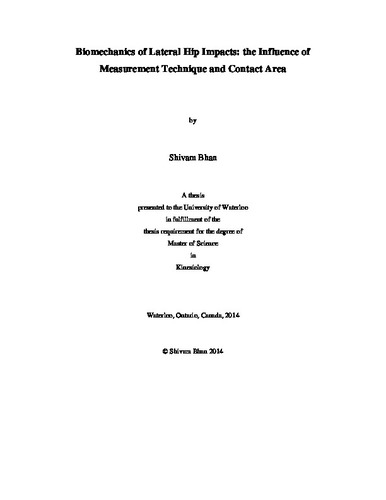 The experiments presented in this thesis provide novel insight into two scarcely studied areas in the field of lateral hip impact biomechanics. The high energy nature of hip impacts requires high sampling rates for accurate study of hip impact dynamics. However, to date only optical motion capture, with relatively lower sampling rates (240-400 Hz), has been used to measure pelvic deflection during hip impact experiments with human participants. As such, the results from the first study compared the differences between two measurement systems (3D optical motion tracking and 2D high speed videography) in measuring common variables of impact biomechanics (peak force, time to peak force, peak deflection, time to peak deflection and energy absorbed). Although significant differences were seen between systems in measuring TFmax and Emax, the magnitude of differences were at or below 5% of the total magnitude of each measured variable. Furthermore, averaging impacts within a subject reduced the differences between systems for Emax. Furthermore, this study showed the effect of sampling rate on measuring hip impact dynamics, and how sampling at lower frequencies affects the aforementioned variables. Tests on the effect of sampling rate found differential effects contingent on the dependent variable measured. Sampling as low at 300 Hz, significantly reduced measures of Fmax and Dmax, but only by on average 0.7 and 0.5 %, respectively. Whereas measures of TFmax and TDmax increased by on average 9.5 and 6.8 %. Sampling Emax at 500 Hz and 300 Hz increased measures of impact absorption by 2.2 and 2.8 % respectively. Sampling at 4500 Hz was the lowest sampling rate that was not significantly different from 9000 Hz across all dependent variables. The second study in this thesis investigates the influence of contact area on load distribution during lateral hip impacts. In summary, this study shows that all three time-varying signals (Ft, FTt and Dt ) were significantly correlated with time-varying contact area (Ct). These results lend support to the possibility of modeling lateral hip impacts with contact models, but provide little support for a Hertzian model adaptation. Analysis on the relationships between body mass and BMI found both anthropometric measures to correlate significantly with peak impact force, but not with peak impact force directed to the greater trochanter. These results bring into question the feasibility of modeling hip fracture risk with body mass or BMI as inputs, without further investigating the distribution of impact force to the greater trochanter. In this study only contact area was significantly correlated with all measures of GT specific loading, and has never before been implemented in predictive modelling of hip fracture risk. Finally, this study found that although effective mass, total body mass and BMI were significantly correlated with the contact area at peak force, they only accounted for 21, 22 and 33% of the variance in CA. Altogether, this study sheds new light on the role that contact area plays in lateral hip impact loading and the importance of understanding load distribution during lateral hip impacts. It also highlights the importance of moving towards predictive models that incorporate more robust estimate of body composition and geometry, with hopes that these will better help estimate the risk of hip fracture. Overall, this thesis provides insight into the expected differences between measuring hip impact dynamics with two, relatively different measurement techniques. In addition, it highlights the need for further study on the relationship between contact geometry and hip fracture risk, something not currently implemented in most hip fracture risk models.