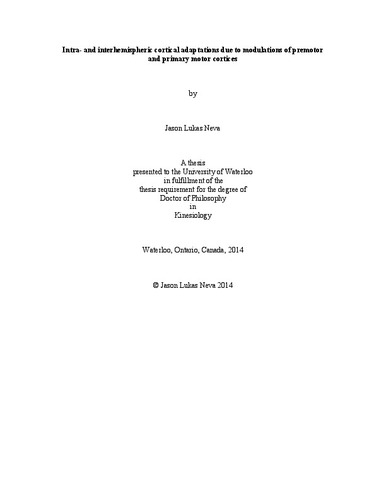 Movement training modulates the excitability in several cortical and subcortical areas. Compared to training with a single arm, movement training with both arms yields a greater increase in motor related cortical regions. A short-term session of bimanual training (BMT) enhances cortical activity of motor preparation and execution areas in both hemispheres. The underlying neural mechanisms for this increased activation with BMT are unclear, but may involve interhemispheric connections between homologous primary motor cortex (M1) representations and input from motor preparatory areas (i.e. dorsal premotor cortex (PMd)). Also, it is unclear how selective up-regulation or down-regulation of specific motor-related areas may contribute to changes in M1 excitability when combined with BMT. The work in this thesis investigated modulation of M1 excitability in terms of in-phase versus anti-phase BMT (Study #1), potentially up-regulating the left dorsal premotor cortex (lPMd) via iTBS before BMT (Study #2), theoretically down-regulating contralateral (right) M1 homologous representation before BMT (Study #3), and finally the potential intracortical and interhemispheric cortical adaptations in M1 bilaterally due to the same interventions as Study #2 (Study #4). For Study #1, it was hypothesized that in-phase BMT would lead to an increased excitability in M1. For Studies #2-4, it was hypothesized that modulation of motor-related areas would cause an increase in the excitability of left M1, and this modulation would be greater when combined with BMT. Study #1 found that in-phase, and not anti-phase BMT, lead to increase M1 excitability. Study #2 found that iTBS to lPMd followed by BMT caused a unique increase in M1 excitability, in terms of increased spatial extent and global MEP amplitude. Study #3 found that the combination of cTBS to right M1 with BMT caused greater excitability enhancements than either intervention alone. Finally, Study #4 found distinct modulations of cortical excitability within and across M1 bilaterally due to BMT, iTBS to lPMd and the combination of these interventions that involved long-interval inhibitory circuitry asymmetrically. Overall, this current work found that the modulation of remote cortical areas to M1 (i.e. lPMd and contralateral M1) in combination with movement training led to unique, and at times greater, excitability enhancements of M1 which could be advantageous in enhancing short-term plasticity in damaged M1.