SEPARATION OF HEAVY METALS FROM WATER USING FIBROIN AS ADSORBENT 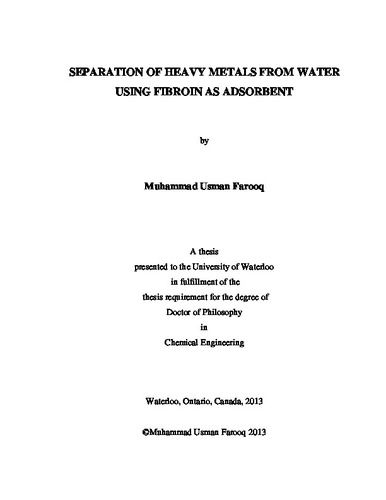 Discharge of untreated industrial effluents containing heavy metals is hazardous to the environment as they are highly toxic, accumulates in the food chain and persistent in nature. Because of these adverse effects, their removal from wastewater is a substantial step in the protection of the environment and human health. Biosorption is found to be an eco-friendly, economical and lucrative separation technique in the removal of metal ions from effluent. This study explores the seperation potential of a new sorbent, fibroin (constituent of natural silk spun by Bombyx mori) for the removal of lead, chromium, copper and cobalt ions from effluent water. The biosorbent was prepared by the separation of cocoon into its constituents, fibroin and sericin. The removal of sericin from fibroin, called silk degumming, was carried out by water extraction method. Effect of temperature (55-95oC) on the kinetics and quantity of sericin removed was studied. The separation kinetics was approximated by the intraparticle diffusion model and the pseudo-second-order equation. Biosorption characteristics of fibroin for the removal of lead, chromium, copper, and cobalt ions from aqueous solution were investigated through a batch study. The effect of initial solution concentration, contact time and temperature on the sorption process was investigated. The adsorption equilibrium was described by the Langmuir isotherm. The thermodynamic parameters, the change in enthalpy (∆H) and change in entropy (∆S), were calculated by using Van’t Hoff plot. An accurate mathematical expression was used to calculate Gibbs free energy (∆G), for the adsorption of all metals on fibroin. For the kinetic data analysis, pseudo-second-order equation was modified based on the fact that the term qe in the kinetic equation should be the equilibrium uptake corresponding to the instantaneous metal concentration in the solution. In order to evaluate the rate constant k2, sorption kinetic data was fitted to the modified pseudo-second-order equation. The calculated values of rate constant k2, for the adsorption of all metals on fibroin, were used to the modified pseudo-second-order model to predict the kinetic data. A good comparison was observed between the experimental data and model calculations. The kinetic data was also fitted to the intraparticle diffusion model which showed a multi linear trend. The metal ions were desorbed from fibroin up to ten cycles of adsorption and desorption by using 0.05M ethylenediaminetetraacetic acid (EDTA). The removal of metal ions from fibroin was found to be rapid since complete desorption occurred within 15min. The uptake capacity of fibroin and adsorption/desorption kinetics remained almost the same even after ten cycles. The rate constants for both adsorption and desorption were also calculated by fitting the kinetic data to the modified pseudo-second-order model. The dynamic adsorption was studied in a flow-through column packed with fibroin for the removal of all metals. Experiments were performed in order to study the effect of influent concentration (12-75ppm), influent flow rate (0.15-0.24ml/min) and regeneration of fibroin bed (upto 4 cycles). Whereas the bed height, column diameter and amount of adsorbent packed were kept constant during this study. Fibroin bed saturated with metal ions was regenerated effectively by using 0.5M EDTA solution. After four consecutive cycles of adsorption and desorption, no change in the uptake capacity was observed. The bed depth service time model, the Thomas model and the Yoon-Nelson model were used to analyze the breakthrough data. The calculated values of Yoon-Nelson constants were used to predict the breakthrough curves. A good comparison was observed between experimental data and the Yoon-Nelson model calculations. An investigation was conducted to check if the adsorption of metal ions was carried out either by the surface of the fibroin or they were adsorbed deep inside its polymer network, and bulk was used. For this study, silk fibroin was transformed into thin films of three different thicknesses having same surface area. Batch experiments were conducted to study the thickness effect of fibroin films for the adsorption of metal ions. A constant amount of metal uptake for all three fibroin films showed that the adsorption was not a surface phenomenon, but the bulk body of the fibroin was used for this separation. Kinetic data was fitted to the modified pseudo-second-order model. The kinetic rate constant k2 was not significantly affected by the film thickness which abrogated the possibility of simple diffusion mechanism for metal sorption into fibroin. Fibroin films loaded with metal ions were desorbed once dipped in deionized water. The desorption kinetics was again described by the modified pseudo-kinetic-model. The calculated values of desorption rate constant kd were used to predict the kinetics of film desorption. A good comparison was observed between the modified pseudo-second-order model calculations and experimental desorption data of fibroin films.