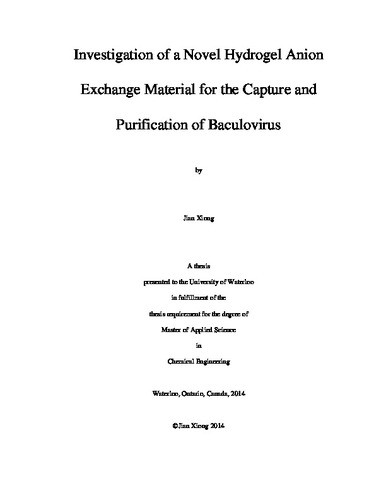 Baculoviruses are versatile viruses that can be used as biopestisides, or for the production of recombinant protein and vaccines. Baculoviruses have also been found to be able to transfer genes to mammalian cells. This finding opened the door for the application of baculovirus vectors in human gene therapy. However, the mass production of clinical grade baculovirus vectors is challenging. Downstream processing has now become the bottle-neck of the manufacturing process. In this work, an anion exchange chromatography-based process was investigated for the purification of recombinant baculovirus vectors using a novel hydrogel based membrane (Natrix Separations Ltd.). Crude recombinant baculovirus supernatant from infected insect cell cultures was first subjected to a clarification process consisting of centrifugation and filtration. The pH of the viral solution was adjusted and then passed through a fast protein liquid chromatography system consisting of the ion exchange membrane. After washing weakly bound impurities, the captured baculoviruses are recovered by an elution step. Overall, baculoviruses strongly associated with the membrane; however, this interaction which was much physical as it was chemical, could not be entirely reversed and baculovirus was lost in the process. Product purity has also been evaluated and up to 85% of total protein reduction was determined. The significant losses of baculovirus observed have indicated major limitations in using this membrane for the purification of baculovirus.

Jian Xiong (2014). Investigation of a Novel Hydrogel Anion Exchange Material for the Capture and Purification of Baculovirus. UWSpace. http://hdl.handle.net/10012/8266