Gecko Adhesion and Gecko-Inspired Dry Adhesives: From Fundamentals to Characterization and Fabrication Aspects 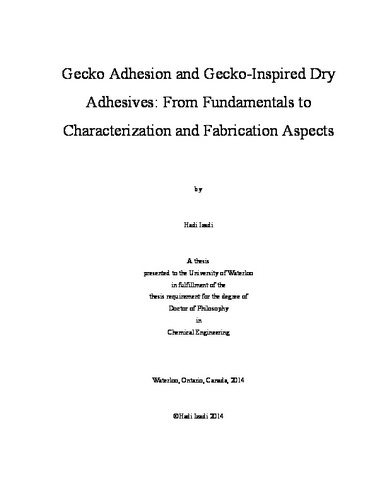 This study focuses on fabrication of dry adhesives mimicking gecko adhesion. We also look into the origin of the supreme adhesion of geckos, which have inspired the fabrication of fibrillar dry adhesives during the last decade or so. In principle, the superior material properties of β-keratin (the main material comprising the fibrillar feature on gecko toe pads) along with the hierarchical high aspect-ratio fibrillar structure of geckos’ foot pad have enabled geckos to stick readily and rapidly to almost any surface in both dry and wet conditions. In this research, non-sticky fluoropolymer (Teflon AF) resembling β-keratin rigidity and having an extremely low surface energy and dielectric constant was applied to fabricate a novel dry adhesive consisting of extremely high aspect-ratio nanopillars (200 nm in diameter) terminated with a fluffy top nanolayer. Both the nanopillars and the terminating layer were fabricated concurrently by replica-molding using a nanoporous anodic aluminum oxide membrane as the mold. In particular, upon infiltration of Teflon AF melt into the anodic aluminum oxide nanopores, the polymer melt fingered over the pore walls. The fingerlike structure formed during infiltration, subsequently collapsed after removal of the mold, developing a unique sheet-like nanostructure on top of the base nanopillars. Concurrent fabrication of the terminating nanostructure helps the fabrication of extremely high aspect-ratio (27.5–225) nanopillars which, up to an aspect-ratio of 185, neither collapse at the tip nor bundle. In order to fabricate nanopillars of different topographical properties, in our first approach, the height of the nanopillars as well as the size and density of the terminating nanostructure are carefully controlled by adjusting the processing temperature. Following that, a novel replica-molding technique for fabrication of bi-level Teflon AF nanopillars is reported. The developed technique relies on the concurrent heating and cooling of the Teflon AF melt which filled vertically-aligned alumina nanochannels. Unlike conventional polymer infiltration methods which consist of filling the mold by only heating the polymer above its glass transition temperature, in our novel method, the polymer melt is also simultaneously cooled down during the infiltration process. Concurrent cooling of the Teflon AF melt allows control over the interfacial instabilities of the polymer thin film, which forms ahead of the polymer melt upon its infiltration into the alumina nanochannels. Doing so, the geometrical properties of the subsequently developed peculiar fluffy nanostructure – after removal of the mold – on top of the extremely high aspect-ratio Teflon AF nanopillars (~25 µm tall) are modified. In this project, we have also shown that the adhesion of the fabricated dry adhesives for the most part arises from electrostatic interactions of the applied polymer. In other words, Teflon AF, having an exceptional potential for developing electric charges at its surface upon contact with other materials via the so-called contact electrification phenomenon, can develop significant electrostatic interactions at its surface upon contact. In the current thesis, tribological results were discussed in detail to clarify the contribution of the structural properties of the fabricated dry adhesives toward their remarkable adhesion and friction forces generated via contact electrification. Nanopillars of specific geometrical properties have achieved remarkable adhesion and friction strengths, up to ~2.1 N/cm2 and 17 N/cm2, respectively (up to ~2.1 and 1.7 times larger than those of a gecko toe pad). It is commonly accepted that the adhesive performance of other synthetic bio-inspired dry adhesives is due to the formation of van der Waals interactions at the tip or side of the dry adhesives fibrils with the substrate they are brought into contact with. However, what has been usually neglected in this connection is that electrostatic interactions may also be developed at the contact between any two materials via the familiar contact electrification phenomenon. Although contact electrification is common and can have a large influence on interfacial interaction forces, its impact on adhesive properties of synthetic dry adhesives has been overlooked. Our results on adhesion of bi-level Teflon AF nanopillars, which can generate strong adhesion forces relying on electrostatic interactions arising from contact electrification, have brought to light again the idea that charging the surface of dry adhesives, specifically polymeric ones, can play a very crucial role in their adhesive behavior. From this perspective, the main reasons that have caused this lack of attention to this concept and the possible contributions of contact electrification to interfacial interactions of polymeric dry adhesives, other than bi-level Teflon AF nanopillars, are also thoroughly discussed in this thesis. Besides synthetic fibrillar dry adhesives, the possibility of the occurrence of contact electrification and its contribution to the supreme dry adhesion of geckos have also been overlooked for several decades. In this research, by the simultaneous measurement of electric charges and adhesion forces that gecko toe pads develop on two distinct substrates (a sticky and a non-sticky one), we have shown that the toe pads generate significantly large amounts of electric charge on both substrates. More importantly, we have found that there is a direct correlation between the contact electrification-driven electrostatic forces and the measured adhesion forces. Otherwise stated, we have shown that what makes the difference that geckos stick strongly to one surface and not to the other are the electrostatic interactions arising from contact electrification, and not van der Waals interactions, which have been considered as the prime source of adhesion of geckos for many years.